Nineties “All Stars” Smash Mouth brought their hit-laden danceable rock to the Grove in Los Angeles as part of the Citi sponsored Summer Concert Series. The crowd at the Grove were pumped up, with people randomly yelling “Hey Now,” everywhere you turned. 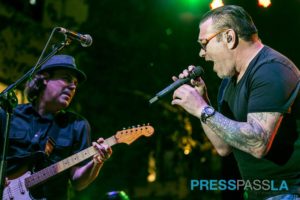 By the time Smash Mouth hit the stage at 8:15, there really was no place to turn, every square inch of open space had been taken over by a crowd eager to see a free show by the multi-platinum selling band. Their set didn’t disappoint, touching on all the hits.

It starting off with cover of Question Mark and the Myste-rians “Can’t Get Enough of You Baby,” and they crowd went wild. The band spent the next hour taking the audience through a tour of their best loved songs, such as “Walkin’ On The Sun,” “Pacific Coast Party,” and “Then The Morning Comes.” There was a fun cover of the Kinks “You Really Got Me” that had the audience bouncing along, and then they brought out their heavy hitters, “I’m a Believer” from Shrek, which got the audience so revved up there was actually a crowd surfer, and finally their multi-platinum single “All Star” which had the capacity Grove audi-ence singing along with every word until the song digressed into an extended jam. 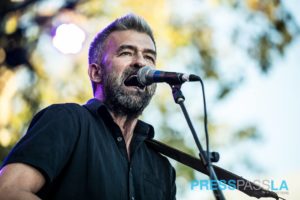 Opener Brian Vander Ark is the lead singer of The Verve Pipe, best known for for the 90s hit “The Freshman.” His acoustic set featured a mix of classic The Verve Pipe tunes such as “Barely (If At All)” and “Veneer”, as well as a new song, “If I Could Make You Feel,” and a fiery cover of “Smells Like Teen Spirit.”

The Grove’s 2016 Summer Concert Series concludes next week with a performance by Cher Lloyd.