Snowpiercer is one of the summer’s best movies, which is a real shame because almost no one will be able to see it in theaters. In a season ruled by loud, mindless, CGI-fueled movies Snowpiercer attempts something different and manages to mostly succeed. It is a film unafraid of being ambitious when most are tied down to formula.

The story itself is classic science fiction at its best. After mankind jumpstarts the next Ice Age the remaining humans are packed on to a giant train that never stops. But with confinement comes conformity and a strict class-system is introduced that keeps the ultra-poor at the very back of the train and the ultra-rich at the front. In a situation like this rebellion is inevitable, and that is exactly what happens. 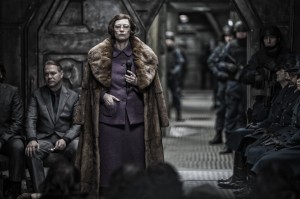 Led by the desperate but resourceful Curtis (Chris Evans, once again proving just how much we underestimated him in the past) the back of the train mounts an armed resurgence against Wilford (Ed Harris) the mysterious inventor of the train and his cult-like cronies. Over the course of the film the movie manages to tackle concepts of power, manipulation and pre-destination. Along the way they butt heads with Mason (a near unrecognizable Tilda Swinton) and must deal with the truly surreal state of humanity in this dystopian future.

Director Joon-ho Bong has created a stunning world using minimal spaces. The decision to take advantage of a multi-cultural cast allows him to switch genres seamlessly adding yet another layer to this enigma of a film. His use of practical effects over CGI is much appreciated too as it makes the dirty, complicated world inside the train all the more real.

The movie isn’t perfect by any means, but it is a discussion piece. No matter how you feel about it you will come out of theater with questions about power, wealth and freedom. There is unquestionably a lot going on in the film and much can be gained from multiple viewings.

So why can’t you see it? Snowpiercer was originally slated for a wide release, and has the cast and budget to back up that kind of showing, but Bong’s unwillingness to alter his vision to satisfy The Weinstein Company slated it in a position where it can only be seen by those lucky enough to seek it out.

Just months before its release The Weinstein’s wanted Bong to cut the film by 20 minutes for American audiences and add a new ending. By publicly refusing fans backed his move and assured a release of the uncut version, albeit at a price. As if to punish Bong, the studio put the film up against its polar opposite, the highly funded and over-marketed Transformers: Age of Extinction thus assuring it would attract the smallest possible crowd.

But that doesn’t mean Snowpiercer can’t still make an impact. Once word of mouth spreads about the film more and more people will see it and it will take its proper place in cult cinema. Transformers may get the bigger box office but Snowpiercer will live on at midnight showings and revival houses for decades to come.