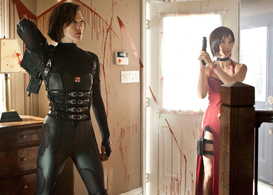 How do you continue a movie franchise when the story has completely run its course with the existing characters and storylines? Why, just take everything and start all over again from a completely new beginning. That was director Paul W.S. Anderson’s plan for the fifth installment of the Resident Evil franchise.

Taking on a completely new look and breaking away completely from the already dwindling connection to its source material, we are left with what is easily the most different film in the franchise to date. But does it work?

Our film opens with the closing events of the previous franchise being played in slow motion and in reverse. This is actually a unique and interesting way to use 3-D technology and a proper utilization of the credits as a part of the movie itself; rather reminiscent of films like Zombieland. However, any insight or genius is completely stripped when we are shown the scene immediately after the obligatory exposition from Alice, again played by Milla Jovovich. Alice is captured by the Umbrella Corporation, which is now under the command of the Red Queen; the artificial intelligence that created such hassle from the first movie. Leading the charge of survivors against the evil Umbrella is former CEO Albert Wesker, played by Shawn Roberts, and Ada Wong, played by Bingbing Li. There is also a team of special forces who come in to try to save her as well, but they are just protagonist fodder for the zombies, lickers and every other T-Virus-Infected mutants that Umbrella has to offer.

The visual aspects that this film undertakes are very respectable. Moreover, with the 3-D aspects, it really does bring the audience into a wide range of visuals, despite the entire thing taking place within an Umbrella facility. Whether they are on the seats of Moscow, the confines of suburbia and even the Arctic tundra. Each of the sets is very realistic and engaging.

The unique aspect of this movie is that, as a result of the twists of the latest installment, we are able to see some of the characters who were dispatched in earlier films, such as Michelle Rodriguez and Colin Salmon. Unfortunately, for the most part, this opportunity was widely squandered. With the exception of getting to see quite an excellent one on one fight scene between Alice and Rain (Rodriguez), most of them are dispatched before even getting off a few lines.

The only aspect of horror that still exists in the Resident Evil Franchise is introducing too many characters and not taking the time to flush any of them out before killing them. Despite not being based on the source material that is tied to video games, this movie felt like an action video game. Level one, escape from the facility and acquire firearms to defend yourself. Level two, meet up with your special forces team. Level three, escape the monster. Even the final scene of the movie looks like it was ripped right out of StarCraft or another similar real time strategy game.

Although video games can be entertaining, they are notorious for having a poor narrative, and this is no exception. Instead of having a plot, that involves a development of characters, advancement of a story and changes in the world around them, it is more events happening in different places, the characters react and move on to the next event. Monster(s) show up, Alice beats it down, go to next area, receive jump scare, have a shootout and a daring runaway where one of the heroes is struck down. Rinse and repeat for 100 minutes.

Those desperately begging that Resident Evil break away from the pitfalls that its franchise has created will be relieved to see that the movie is distancing itself and making it as original as it can. They will, however, be disappointed as this film fails to produce, as they say in the business, a ‘good movie’. The characters are bland as dialogue fails to be anything even the slightest bit engaging, the action scenes are completely abundant as the audience is never given a chance to relax in-between and the visuals, though interesting and quite beautiful at times, are laden with obvious and copious amounts of CGI.

There isn’t anything special here, and it is apparent that the film is on its last legs. This should only be seen by fans of the films up until this point, as there will be little to no enjoyment by the general audience. I, for one, was left disappointed.