Last week, the American Film Institute’s 28th annual AFI Fest presented by Audi exhibited over a hundred of this year’s most celebrated films from all over the globe. Truly a love letter to the art of cinema, the week long festivities were hosted in the very heart of the film industry, Hollywood’s famed Chinese Theater.

Amidst all of the festival’s buzz and excitement, I found a little gem, an advanced screening of a whimsical and profound animated feature from the Academy Award nominated director of The Secret of Kells,  Tomm Moore. Known as the Hayao Miyzaki of Ireland, Moore, along with screenplay writer, Will Collins lovingly crafted Song of the Sea an uplifting adventure steeped in ancient Celtic mythology. This heartfelt meditation on childhood, the supernatural and Irish culture shines with pure heart and soul.

At its emotional core, the “Song” is the tale of a half-human, half-seal creature—a Selkie named Bronach (voiced by Irish singer-songwriter Lisa Hannigan) who falls in love with a human man, a lighthouse keeper named Connor (Brendan Gleeson). One night, she inexplicably vanishes into the sea, leaving her husband with two small children and a broken heart the size of an ocean. The three of them live on a small, isolated island off Ireland’s hauntingly beautiful coast.

While the son, Ben grows up to be spirited and feisty, his younger sister, Saoirse (also believed to be a Selkie) is a mute who radiates with the warmth of her mother’s spirit. On the night of her sixth birthday, Saoirse finds herself drawn to the sea to play with a pod seals. The children’s visiting grandmother (Fionnula Flanagan) is alarmed by this behavior, declares the island too dangerous for the children. She takes the two of them to live with her in the city. Miserable in the cramped, modern Dublin, Ben and Saoirse embark on a mystical and enchanting journey across the Irish countryside on their way back home.

Here, Moore delves into what we pass on through the generations— the pain, the myths and the love. He perfectly captures modern-day Ireland as a 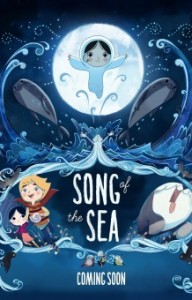 culture on the brink of losing its traditions, its history. This delightful film invites the viewer into a magical realm where the legends are real and the natural and supernatural merge and meld into one. Written with a great deal of poeticism, the film explores the symbol of circle. It pervades every aspect of the story.

The magical shell that Bronach gives Ben before her disappearance, the swirling currents of the sea, the dancing orbs of light that guide the children on their way all bear the mark of the swirling circle. Even the nature of Ben and Saoirse’s journey itself is circuitous. It creates a sense of timelessness within the film. All things are cyclical and the flow of time rhymes like an ancient poem sung aloud. Not only were the filmmakers great inspired by the grand Irish literary tradition, but the artistic one as well. “Song” art director, Adrien Merigeau brilliantly mixed the aesthetic of pre-Celtic stone carvings with the melancholy look and feel of a Paul Henry landscape and the flatness, saturated color and vivid emotionality found in modern art. Each frame of the film is painting within itself.

It’s plain to see that Song of the Sea is a labor love for Moore. To be able to witness such a loving, handmade approach to filmmaking is heartwarming. So, take a dip in this exquisitely deep and brilliant film.