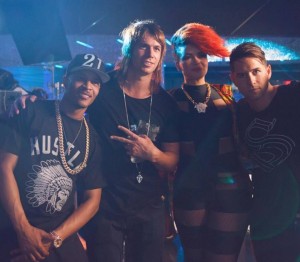 T.I. has previously collaborated with some of the biggest stars in music including Justin Timberlake, Eminem, Jay Z, and Kanye West, not to mention working on Robin Thicke’s “Blurred Lines” arguably the biggest track of 2013.  “I have collaborated with other EDM artists at parties on many nights, however it’s just never been an official release. This will be my first EDM collaboration on a public forum on a worldwide platform,” said T.I.  He added, “It was an awesome opportunity working with the Stafford Brothers. I am now going to buy a condo in Australia and live on the Gold Coast with them.”

Eva Simons broke onto the club scene in Afrojack’s “Take Over Control”, which later led to a personal request from Wil.i.am. “This Is Love” Wil.i.am feat. Eva Simons went on to break into the Top 10 in 17 countries with over 173 million views on YouTube. “They  (Stafford Brothers) are the most fantastic guys I’ve ever met. They’ve taken me places musically I’ve never been before. I’ve never had so much fun as I had working with the Stafford Brothers and T.I.,” said Simons.

The Stafford Brothers first leaked the collaboration via an exclusive private performance alongside Eva Simons at a warehouse party in the heart of Sydney thanks to Vodka Cruiser, inthemix.com.au and MTV. Chris Stafford says “We knew it was shaping up to be a great track when we first heard Eva’s vocals, we were thrilled when we heard from management that T.I. was into it and wanted to do a feature. Having such a huge superstar be a part of this is truly amazing and a huge honor.”

The Stafford Brothers have had an incredible year already in the U.S., and are now residing in Los Angeles and spend most of the year touring North America. This year alone, the Stafford Brothers have performed at Ultra Music Festival, EDC, iHeart Radio Music Awards, and the Fame & Philanthropy Oscar Party,  and they made their Tomorrowland debut in Belguim last month.

Matt Stafford says “It’s been such a big year for us in the U.S. We’ve been touring North America since the start of 2014, playing over 120 shows and getting in the studio as much as possible. We’re pumped that we are finally releasing our first single in the U.S. and can’t wait for America to hear “This Girl!” It’s been a while in the making…”

“This Girl” will be available worldwide August 12th.