HFPA President Lorenzo Soria made the announcement at the invitation only event held at Catch LA in West Hollywood, presented by FIJI Water.  “For the firs 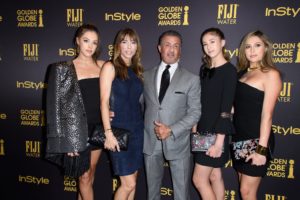 t time in Golden Globe history, we have proudly selected not one but three Miss Golden Globe representatives. The Stallone sisters will continue our time honored tradition of handing out the statuettes at the awards ceremony,” said Soria. “Each of the lovely young women in the triad have had success whether it be in academics, sports or pursuing a modeling career. With being raised by such role models Sylvester and Jennifer, we can’t wait to see what the future has in store for these ladies.”

Sylvester and Jennifer Flavin Stallone were beaming in delight that their three daughters, Sophia, Sistine and Scarlet were named Miss Golden Globe.

“We’re thrilled to not only be part of the Golden Globe tradition, but to be making history as the first set of siblings ever chosen for the title and duties,” said the Stallone sisters jointly. “We are proud to be part of the HFPA family, an organization that multiple times has recognized our father’s work in film.” 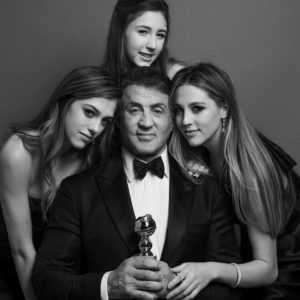 Chosen by the HFPA, Miss Golden Globe is traditionally the child of a well-known celebrity and assists during the Golden Globe Awards ceremony. The 74th Annual Golden Globe Awards will air on January 8th LIVE coast-to-coast on NBC with main telecast from 5:00-8:00 p.m. (PST)/8:00-11:00 p.m. (EST) from the Beverly Hilton Hotel with host Jimmy Fallon. 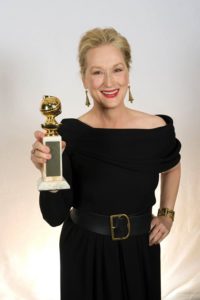 The 74th Annual Golden Globe® Awards will air LIVE coast-to-coast on NBC Sunday, January 8, 2017 from 5-8PM PT/8-11PM ET from the Beverly Hilton Hotel with host Jimmy Fallon. Eight-time Golden Globe-winner Meryl Streep will be the recipient of the 2017 Cecil B. DeMille Award.