STAN LEE’S 2015 COMIKAZE: WHAT IT TAKES TO BE IN COMICS

Along the Mount Rushmore of comic books you will probably see faces such as Stan Lee, Roy Thomas, Alan Moore, and Grant Morrison.

Every year Stan Lee’s Comikaze comic expo gives veterans and newcomers the chance to shine and make a name for themselves with fans in their own private Mount Rushmore.

Katie Shaw, a 30 year old grad student from (San Ramon, CA), is one of these writers at expo who hopes Stan Lee’s convention provides her not just an opportunity to introduce her comic “Dragon Child” to new fans but a chance to live out a personal dream. “I was working on (“Dragon Child”) first when I was 15 years old, writing this story and the fact that now 15 years later it’s coming out and it’s a reality it’s super exciting,” she notes. 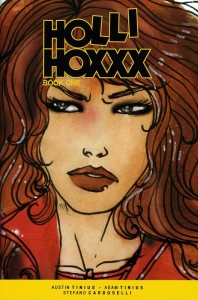 The creator of Holli Hoxx talks about a career in comics.

However, Shaw isn’t the only independent comic writer developing her fanbase at Comikaze. Adam Tinius is hoping the convention can help him reach out to new fans for his series Holli Hoxxx who would otherwise be looking for Marvel or DC comics. “It’s difficult because people come and they want to buy Batman and Superman and things they already know,” he said. “We know Holli Hoxxx is good and we’ve gotten great reviews from people who do read it but we understand that it’s a struggle.”

Tinius’s journey to comic book writer is unique in that the 29 year old from Burbank, California didn’t begin reading comics until he was nearly out of college. It was when his brother Austin, his co-writer on Holli Hoxxx, approached him with a copy of Alan Moore’s Watchmen that everything changed.

“He gave me a copy of Watchmen and said ‘Alright read this, let’s try to do something together,’ he recalled. “After reading that I was blown away by it and just began devouring comics after that.”
Shaw’s own inspirations came from the more Japanese side of the genre with stories such as Dragon Ball and the works of Hayao Miyazaki but it was actually an American series that inspired her to become what she is today.

But for comic book writers such as Shaw and Tinius getting their stories off the ground required a great deal of personal and financial sacrifice as both have largely financed their series themselves.
Shaw admits that she spends “a little under 10,000 a year” on start-up costs alone. 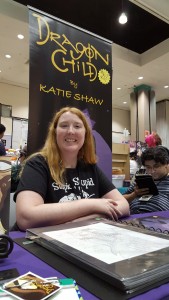 “Since we had to do it ourselves and work other jobs to pay bills, it just took more time” said Tinius of he and his brother’s early struggles. “But we had such a good response from fans who read it and so that encouraged us to see it through to the end.”

Shaw said that she came to the realization to pursue writing this comic while she worked at Apple out of college. “I decided ‘well I’m almost 30 let’s either follow the dream or not,” she laughed. “I hope that it goes off the ground and everyone loves it and wants to buy more.”

Tinius says his advice for people like him looking to break into the industry is simply keep at it and don’t give up. “I think one of the blessings of being a writer is that it’s just you and a piece of paper,” he said with a smile. “It doesn’t cost you anything; just a lot of time. So all I have to say is make time for it.”