Let the nerdgasm begin. The cast to J.J. Abrams’ Star Wars Episode VII has finally been officially announced and the results are not only good but damn near legendary.

The full cast listing is below: 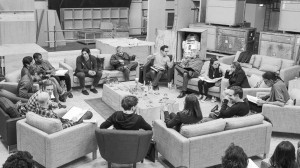 The new Star Wars cast and crew as released today by Starwars.com.

Of course the biggest freak out right now is the announcement that almost the entire original cast is back including Harrison Ford, Carrie Fisher and Mark Hamill. Beyond that the addition of icons like Andy Serkis (who brings cinematic gold to every part he portrays whether it is Gollum or a talking ape) and Max von Sydow has already elevated the movie far beyond that of the prequels.

That is, more or less, J.J. Abrams job after all. By taking the reins from George Lucas he is now tasked with making Star Wars the legendary film franchise it once was instead of the running joke it has now become.

Let me clarify that statement before the fanboys freak out. The original three Star Wars films are cinematic pop cultural touchstones that forever changed the face of cinema. The prequels of the late 90s and early 2000s did a fantastic job of ruining that legacy for entire generations. The writing was horrible, the acting was wooden (yes I’m looking at you Hayden Christensen) and a good portion of it was so boring it was hard to tell why they put it on screen. Think I’m being too harsh? Re-watch Phantom Menace and then tell me I’m wrong.

Abrams clearly knows this so he has taken the approach any true fan would, he has gone back to the source. By bringing in the original cast and, by the looks of it, pretty much ignoring the world of the sequels he is at least making a serious effort to bring the magic back to the franchise.

Still, there are a few concerns. First, beyond Carrie Fisher and Daisy Ridley there do not seem to be a lot of females in the cast. This was always a major concern among critics of the series as, despite having an entire universe to work from, there seems to be a lack of females anywhere in the galaxy outside of one space princess.

The second thing of note is the lack of color in the cast. John Boyega is listed but let’s hope he doesn’t turn into another Lando and has the task of representing the only person of the color in a gigantic, sprawling galaxy. Hopefully Abrams will take a nod from his Star Trek movies and populate hi science fiction universe with people of every race and gender.

Beyond that there’s a lot to be excited about given this announcement. The franchise seems to be getting back to its roots and if Abrams was able to bring in the entire old cast he must have something of real quality on his hands.

Star Wars Episode VII will be released worldwide on December 18, 2015.