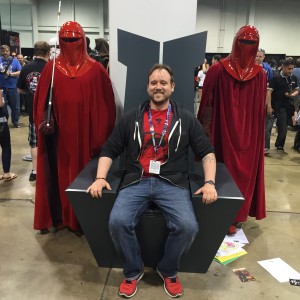 Star Wars Celebration is a fan gathering to celebrate the Star Wars film franchise, started by Lucasfilm in 1999, coinciding with the release of “The Phantom Menace.” Each year the celebration switches locations, from Denver, Colorado to Orlando, Florida, and even branches outside of the U.S. to locales such as Japan and Germany.

I have been aware of Celebration since its first year in Denver. I remember being disappointed that it was so far away from where I lived at the time in Northern Virginia. I had previously (in the mid-nineties) been to one small “Star Wars/Star Trek Convention” locally, attended with my buddy, Chris, when in high school—we were 15 years old and massive Star Wars fans. We met David Prowse, (Darth Vader himself!) along with Peter Mayhew (who played Chewbacca), but other than that it was primarily a Star Trek convention. Star Wars wasn’t loved by all (like in the 1980’s), as it is once again today. Chris and I couldn’t believe we were the only two people in line to meet the men inside the suits of some of our favorite fictional characters— everyone else was in line to meet the crew of the various Enterprises. It worked to our favor though, because the gentlemen (who were both very sweet) humored us and chatted for a very long time, asking our favorite moments in the movies, sharing stories from set, etc. They really made our experience memorable. Until now, that was my first and only Star Wars convention, and I loved it.

Now, a 30-something adult living in Hollywood, I find out that the biggest and best Star Wars convention of them all is going to be just 30 miles away in Anaheim, California. I got my 4 day pass, booked a hotel close to the convention center, and was ready to come together with the largest Star Wars gathering in the galaxy. With “The Force Awakens” (the first Star Wars movie to release in a decade) coming out later this year, the Celebration was going to be an exciting event for a Star Wars fan of my caliber. Did I mention that I have a life-size Lucasfilm Yoda replica, multiple replica lightsabers, and limited edition Star Wars collectables lining shelves in my movie room? I feel that’s relevant, so you can fully understand that I am a lifelong Star Wars fan, and truly excited to attend the Star Wars Celebration and immerse myself in all things Star Wars for a 4-day departure from reality. 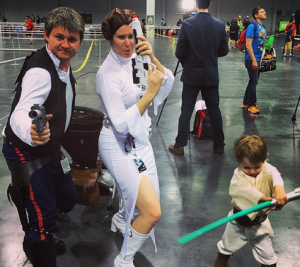 It’s now Thursday morning, the first day of the con, and I’m feeling 15 years old again. As I walk towards the Anaheim Convention Center, still blocks away, I know I am heading in the right direction because there are myriad Stormtroopers, Jedi, various aliens from the Star Wars universe, and collected fanboys, all proudly wearing their Star Wars shirts. There is a positivity and electricity in the air, because we are all there for one reason—our love of Star Wars.

I enter the convention center and pickup my media pass, and with a grin from ear to ear, I enter the already packed main hall. The giant hall is filled with vendors selling everything Star Wars—toys, clothes, collectables, custom art, autographs, licensed merchandise along with custom made items. It is a Star Wars collectors paradise, provided your wallet can support your desires. The main hall is sectioned off to make things slightly easier—vendors in one area, artists (both known and unknown) selling original artwork and prints, in another. There is even a section to get your favorite Star Wars characters tattooed to show your dedication to the Rebel Alliance or the Empire, bringing in the countries top tattoo artists all under one roof.

Fans show their dedication to the franchise in all sorts of ways, from hats and tee shirts to store bought halloween costumes of their favorite characters, to full on film quality costumes of both well known characters from the films, to lesser recognizable characters from books and video games. “Cosplay” (costume play) has become a big thing to do at conventions over the years (like at the well known San Diego Comic-Con for example), with peoples’ costumes ranging from screen-accurate to literally put together with tape and glue. At Star Wars Celebration you see Stormtroopers and Jedi, Slave Leias and Chewbaccas—if the character exists, someone will dress up as them. I’m wading through the crowd, passing short Darth Vaders, fat Darth Vaders, and some perfectly sized and suited Darth Vaders as well. All one has to do is call the character by name (or simply get their attention) and ask for a photo, and instantly the various characters strike an appropriate pose. My first day was spent taking it all in and trying to get the lay of the land. The people watching alone makes the price of admission worth it. 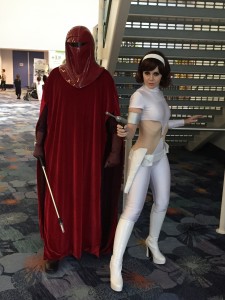 My second day, Friday, after a few hours of taking pictures and checking out the wide assortment of collectables, I decided to get a picture with my childhood hero, Luke Skywalker. Along with everything already mentioned, the main hall also has a section where (at specific times throughout the 4 day event), for a price, you can get an autograph and/or photo taken with a wide range of actors and actresses from the films. I figured this would be most likely be my only chance to meet Mark Hamill, the man who played Luke Skywalker in the original film trilogy, I couldn’t pass up this once in a lifetime chance. So I shelled out some cash and waited in line, smiling while thinking how the 15 year me wouldn’t have believed that one day I’d be getting my picture taken with “Master Skywalker”. After an hour+ wait, I finally get to go into the small curtained off section where I see Mark Hamill, older but still very much looking like the Luke Skywalker I grew knowing. I’m of course wearing my Red Five (Lukes call sign when flying his X-Wing starship) shirt, to which Hamill says as I walk up, “Red Five, standing by.”, quoting a line of his from the very first Star Wars film, now known as “A New Hope”. After shaking my hand and asking me if I wanted to do anything specific in the picture, which I didn’t, we posed and the flash went off. He shook my hand again and next thing I know I’m standing on the outside of the curtains, still grinning from ear to ear, while the next individual got his chance to meet Mr. Hamill. It was over before I knew it, but as fast as it happened I couldn’t be happier. I just met my childhood hero. I can now check that off of my bucket list.

Still elated from meeting Mark Hamill, I was hoping to make it into the 3D screening of Revenge of the Sith that was playing that evening in another of the banquet halls on the second floor of the convention center. However, as it was the world premiere of RotS in 3D, showing up almost an hour early wasn’t soon enough, it turns out people had started ling up in the morning to be the first to see the film in its new 3D transfer. I was turned away. Although I had been looking forward to seeing RotS in 3D (it is my favorite film of the prequel trilogy) nothing could bring me down, I was having a fantastic time at Star Wars Celebration.

Saturday and Sunday I bounced from one panel to another. There are multiple panels happening at one time (in various rooms of the convention center), so sometimes you have to choose one over another. I was able to see Ian McDiarmid talk about his experiences while filming “The Empire Strikes Back” all the way through to “Revenge of the Sith” (he played the various forms of Palpatine (Senator/Sith/Emperor) in all 5 films that the character was in). He talked about his first meeting with George Lucas and getting the part of the Emperor (which he didn’t even have to audition for!). He also read from the newly released “Star Wars Shakespeare” live on stage, which was fantastic fun since McDiarmid is classically trained Shakespearean actor.

I enjoyed the panel with aforementioned Mark Hamill, who was joined by the extremely talented voice actor James Arnold Taylor (The Clones Wars animated TV show, Johnny Test). Hamill discussed things like what it’s like being known all over the world as Luke Skywalker, to providing the voice of Batmans nemesis The Joker on “Batman: The Animated Series” and many his other animated roles. He also spoke on his return to the new hit TV show “The Flash” as The Trickster, a character he played in the 1990 version of “The Flash” (starring John Wesley Shipp), and how he truly appreciates his fans. James Arnold Taylor was host to Hamill on stage, and prior to bringing Hamill out, he performed his one man show “Talking to Myself” where he performs over 200 voices. He voices everything from cartoons and video games to commercials and radio ads. When some of Hollywoods biggest stars aren’t available to rerecord needed dialogue, he fills in for them. He has voice dubbed such stars as Johnny Depp, Michael J. Fox, Christopher Walken, etc. Taylor and Hamill stay very busy voice acting and seem very happy in their work. They complimented each other well and were a joy to watch on stage. 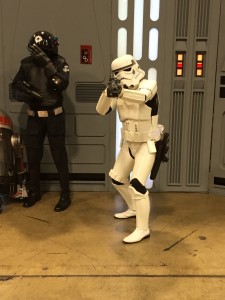 I also managed to catch the “Star Wars: Rebels” panel. Now I haven’t seen the first season of Rebels, but after watching the world premiere of the season 2 trailer, I can tell you that I’m excited to see what Clone Wars (animated) creator Dave Filoni and team do with this new show. Rebels takes place after Revenge of the Sith, but before A New Hope (the original Star Wars). The Empire is large and in charge, and the show follows a small group of Rebels and their fight against the Empire. Season 2 introduces Darth Vader onto the show, which means I’m going to have to watch the first season as soon as possible so I’m caught up when season 2 starts this Fall on the Disney XD channel.

As things came to a close Sunday evening, I didn’t want Star Wars Celebration to end. After 4 days of Star Wars overloading all of my senses, I still wanted more. The energy and vibe the whole time were so positive and fun, everyone was happy to be there. I met people in from Australia, Japan, the U.K. and all over the U.S., all of whom flew in just to be a part of this wonderful and unique experience. It’s funny- if I go to a Dodgers game here in Los Angeles I get searched and go through a metal detector due to violence at games, but at Celebration there are thousands of people carrying (prop) guns and swords and weapons of all kinds, yet there is no violence. There is something to be said for the “geek” community. 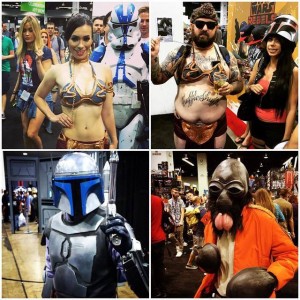 Star Wars Celebration is definitely something I plan to do again in the future. I highly recommend it to anyone that thinks it sounds fun, because it really is. Next year Celebration will be in London, England, so it will probably be a couple of years before I get to attend again. I am so glad that I took the time off to go to this years Celebration, it is something I will remember for the rest of my life. And I have my picture with Master Skywalker, er, Mark Hamill, to remind me of the fantastic thing that is Star Wars Celebration. May the Force be with you, always.