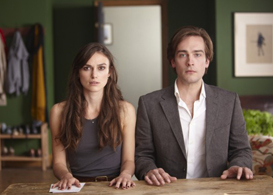 The film industry is not what it used to be. Box office grosses have gone down drastically and filmmakers are constantly looking for new ways to get their projects made. This has led to the growing popularity of short films available on demand rather than in movie theaters. While scaled down, the medium allows filmmakers to tell a compelling story and, in many cases, lets the cast and crew to really spread their wings. Such is the case with the Stars in Shorts film series presented by ShortsHD.

The seven part series includes a wide range of films that covers everything from comedy to science fiction. Each movie lasts no more than a half hour but all of them will stick with you long after the credits have rolled. The fact that all the movies use some of Hollywood’s top talent doesn’t hurt either. Many of the films, like Steve and After School Special, allow the cast to play against type in roles they might not otherwise take. This gives the audience a unique opportunity to watch people in the industry experiment and really have fun with their work.

The festival starts out, appropriately enough, with the minimalistic comedy The Procession starring Lily Tomlin and Jessie Tyler Ferguson. A dialogue driven comedy that takes place mostly in Ferguson’s car, the film really shows off what can be done with next to no budget and a fantastic cast. The movie follows a mother and son as they are forced to take part in the funeral of someone they barely know, leading to a series of hilariously awkward situations. As much as Tomlin steals the show Ferguson plays off her banter perfectly making them a great comedy team.

This is complimented by the far more risqué but brilliant Not Your Time starring Jason Alexander. The film is a diamond in the rough and, in its half hour running time, manages to nail exactly what it is like to live and work in Hollywood. A work of pure satire it could easily be compared to The Producers as Alexander’s character finds his greatest success at his lowest point.

Switching tones the festival balances out its roster with plenty of drama. Neil LaBute once again pushes the envelope withAfter School Special, a film with a twist the audience will never see coming. An experienced playwright LaBute knows just how to manipulate the audience just enough before landing the sucker punch of an ending that will leave your jaw on the floor. This is the second time this year LaBute has pulled a fast one on the audience, taking the same approach withDouble or Northing during the HollyShorts film fest. It takes a lot to fully flesh out a character in just a few minutes time but LaBute has mastered the art. Many of the films use only one location and let the actors and the directors’ experiment within the confined space.

This was never more apparent than in Steve starring Keira Knightley and Colin Firth. While it takes a little while to get moving and the plot itself is kind of muddled the performances really take the film to another level. Firth, who has been typecast in rather boring British roles for the past couple of years, gets to show his range as the mentally unstable neighbor that just wants some company. Watching Firth unravel is a joy and, though the film ends abruptly, you cannot help but want more.

The Stars in Shorts film festival highlights a movement in the industry that is slowly becoming mainstream. With the creation of on demand viewing filmmakers must alter their approach to the art itself. Having great names like Lily Tomlin, Keira Knightley and Judi Dench behind each of the projects allows the films to have far more attention than usual.

Those in the Los Angeles area can see the series on Sept. 28 as it makes it premiere at the Nuart Theatre. It opens in major cities nationwide on the same date and will also be available on demand starting Oct.9th.

Visit Stars in Shorts for more information on local listings.