STEVIE WONDER ANNOUNCES SONGS IN THE KEY OF LIFE TOUR

Legendary singer-songwriter, Stevie Wonder was beaming with joy as he assembled members of the press at LA Live’s Grammy Museum on Wednesday to make a major announcement. 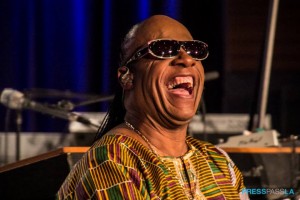 Here, amongst the treasured relics of music’s past, the iconic master of soul joked, “The whole blind thing has been a gimmick. I actually drive a Tesla.” The crowd erupted in laughter.

No, the true reason behind Wonder’s appearance at this temple dedicated to the love of music was the announcement of his upcoming month-long eleven-city North American tour. Wonder’s Songs in the Key of Life tour promises to be a loving look back at the artist’s seminal 1976 album of the same name that won him a total of four Grammys that year.

This masterpiece of a collection includes such classics as “Sir Duke,” a tribute to Duke Ellington and “Isn’t She Lovely,” a tune that celebrates the birth of his daughter, Aisha and seems to radiate pure divine love. As he sampled a few of these famed tracks on Wednesday, Wonder seemed to embody playfulness and excitement. One can tell that this superstar truly loves playing these songs and cannot wait to share them with his devoted fans again.

Starting at New York’s Madison Square Garden on November 6, Wonder, the recipient of an astounding twenty-five Grammy awards will play venues including Boston’s TD Garden, Chicago’s United Center, and end up at Oakland’s Oracle Arena on December 5th. Tickets go on sale Monday September 22 at LiveNation.com and the Live Nation Mobile App. Citi cardmembers will have access to pre-sale tickets starting Tuesday, September 16 at 10 am. 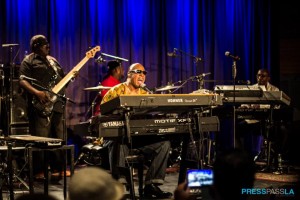