STRAIGHT OUTTA COMPTON ONE OF THE SUMMER’S BEST: REVIEW

Straight Outta Compton follows a group of hip-hop artists emerging off the streets of Compton, CA to become the leading voice for a demographic struggling to be heard amongst the racism and police brutality that took hold of 1980s America.

N.W.A. was undoubtedly a force to be reckoned with, combining their honest lyrics and no holds barred attitudes to fabricate a new formula and reinvent the American Dream. This film does an outstanding job of showing the rise of N.W.A. through the golden age of hip-hop in one of the best films of the summer.

Director F. Gary Gray took the reigns on what was a clearly a risky film. An enormous attention to detail was needed to accurately tell the story of N.W.A., which birthed the careers of super stars Eazy-E, Ice Cube, and Dr. Dre. Gray expertly mixes in real news stories from throughout their time, including the Rodney King beating. The group’s lyrics were inflammatory, but the film does an excellent job at providing context and provocation for each song. 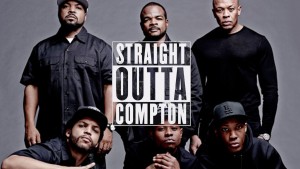 The performances throughout are all top notch; from first timer O’Shea Jackson Jr. channeling his dad (Ice Cube), to Paul Giamatti who plays Jerry Heller, the manager responsible for plucking the group out of obscurity and ultimately for building the business that tore them apart. Jason Mitchell is certainly one to watch. His performance as Eazy-E had him grappling with the highest highs and lowest lows. And of course plenty of rap icons show up and make their contribution to the story of N.W.A., including Snoop Dogg, Suge Knight, and even Tupac.

The filmmakers do a fantastic job at recreating the late 80s and early 90s in terms of production design, wardrobe, and makeup. But while the film is period, it has shockingly relevant themes to today’s society, especially in the wake of Ferguson and the countless police crimes that have been committed over the last few years.

After seeing this film I left a fan of not only their music and their passion to live the American Dream, but also for their desire to be the voice of a generation and to instigate social change against seemingly insurmountable odds.