Celebrity stylist Michael O’ Connor hosted Stylelab’s private jewelry event for the Emmy award nominees, stylists, and presenters and Press Pass LA was in attendance to check out all the red carpet accessories in advance of the big day!

First off, I have to admit that I am a personally a huge fan of Michael O’Connor’s styling. Michael has worked with extraordinary celebrity talent such as Helen Mirren, Jennifer Lawrence, and pretty much any other Hollywood A-lister you can think of at some point in his career.  It was a pleasure to speak with Michael about his experiences as a stylist and his views on the fashion industry.

“Part of accessory design means having an inside view as to what is happening in fashion because fashion dictates trends in accessories to some point. Then, of course, it’s important to be aware of what is happening in the economy,” said O’Connor. He continued to discuss the importance of psychographics, or the study of personality, values, opinions, attitudes, interests, and lifestyles to the fashion industry.  “It is important to study what the social shifts are because this really impacts what we see in fashion and jewelry.”

When I asked Michael what his favorite looks are, he responded “I love old Hollywood glam, whether it’s a 50’s revisited or 60’s revisited look, and interestingly enough I do see that going on.” He added, “there are also so many shows right now set in the 1900s that are really popular like Boardwalk Empire and Downtown Abbey.”

When I asked Michael what inspires him when styling and who his favorite celebs are to work with, he explained “as a designer you get inspiration from a variety of sources- from a person, from their style. I like when people take you out of the stereotype and make you think. Yesterday, I worked with Betsy Brandt and I loved working with her.  I only just started to work with Kate Mulgrew recently and love working with her as well.  Over the years, I’ve worked with Nicolette Sheridan and she just understands style.”

He added a note about the importance of keeping the client in mind, always! “The thing to remember is that when you are styling you are doing the shopping for the talent.

The StyleLab event featured one-of-a- kind jewelry from exquisite worldwide jewelry designers for celebrities to borrow while they walk the red carpet this Monday night. It was such an amazing opportunity to preview the jewelry the celebs will be wearing before they step foot behind the velvet rope! Some of the featured designers included  Bellarri, Brenda Smith, Dena Kemp, Kallati, The Leo Diamond by Leo Schachter, Leeza Braun, Mastoloni, Susan Eisen Fine Jewelry, Takat, the Diamonds with a Story collection, and Vahan Jewelry, among others.

While all the jewelry was stunning and stylistically daring, my personal favorites included the La Vian Couture for the Diamonds With A Story Collection. The collection had a 3-row drop earring set in strawberry gold which was priced at $14,847. This collection could add sparkle to any gown. I enjoyed seeing the ‘Making A Statement’ piece with One Major Earring. This was a 13.65 carat diamond stiletto  from the Leo Diamond by Leo Schachter priced at $200,000. The Bellari jewels were just heavenly! I  saw a ring from Bellarri that was priced at $10,900 with over 26 carats of precious amethyst and diamonds. My eyes could barely handle how gorgeous these were. In addition, I feel in love with the Kallati “True Naturals” diamond ring which have a rich yellow, green, pink, and brown color that can go seamlessly with all types of gowns.  In terms of necklaces, I could not pick a favorite between the Takat Jewels platinum 85 carat necklace or the one of a kind white diamonds by Vahan Jewelry. This would definitely be a tough decision if I were an Emmy nominee! 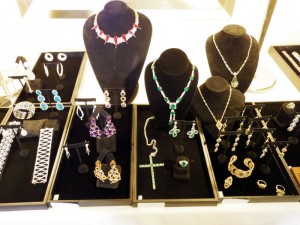 While in the showroom, actresses Kate Linder and Madeline Brewer came in  for styling with Michael which was a real treat to witness. I can not wait to see which pieces make the final selections for the Primetime Emmy’s this Monday night.