Just days away from the 67th Primetime Emmy Awards, the Writer’s Guild Theater opened its doors for a panel discussion with eight of this year’s Emmy nominated writers. 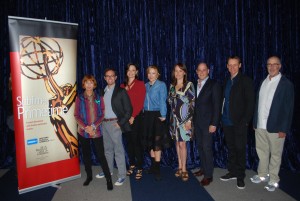 Snacks and refreshments were offered at the reception, where the public socialized with the writers before the panel commenced.

Writer for the television show Olive Kitteridge, Jane Anderson expressed her satisfaction with the industry saying, “I am really proud to be in this medium right now.” 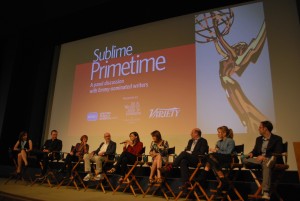 Other writers expressed their views on how the business model for writers is ever changing. Matthew Weiner, writer for Mad Men and The Sopranos, talked about more in depth about the changes. “Traditionally Hollywood, the movie business, comes in and scoops up all the writers and directors,” says Weiner. He mentions the audience needs to pay attention.  “Now it seems to be going the other way, for me The Sopranos is the beginning of what’s going on right now.”

As the head writer for The Daily Show with Jon Stewart, Elliot Kalan discussed how his writing experience was different. “It feels like there’s this writer world… we are so busy making this one show, we really don’t have time to watch or think about the outside world other than what the show we are working on is about,” says Kalan.

“The daily schedule is so tight and we are trying so hard to make it as good as we can while like running on a treadmill.” Furthermore, Kalan mentioned how technology has made an impact on the TV system. “A show does not just air once then disappear anymore, you can watch it many years down the road,” he explains.