Sublime with Rome made a pit stop at Chicago’s Northerly Island last Thursday and the venue was flooded with music fans of all ages. Openers included Mickey Avalon, Pepper and Rebelution.

Sublime with Rome’s (SWR) roster includes original bassist Eric Wilson and  drummer Josh Freese who joined the band in 2012.  Taking over for the late Bradley Nowell is frontman Rome Ramirez.

Since Sublime’s dawning of new surname in 2010, it seems there has been a divide with the fans. There are the old school (early ‘90s kids) and the new school (post-Nowell era) fans.

Fan segregation comes from the battle of old school fans wanting original Sublime’s original epic legacy preserved. Die-hards feel was violated when the name Sublime was used post-Nowell’s death. New school fans put more demand for fresh original music to be produced by the SWR assemble. That new music would build a more unique aesthetic for the band while still keeping its SoCal roots. It is something the band is only just now starting to explore.

That being said, SWR is tasked with upholding fans high music standards, in bearing a name that is considered one of the most influential bands in the past 30 years.

Opening with the cautionary tale “Date Rape,” SWR played the best in nostalgic 90’s chill out anthems. Fan’s beloved songs, such as “Wrong Way,” were easily identified in the way of word-for-word chorusing from devotees. 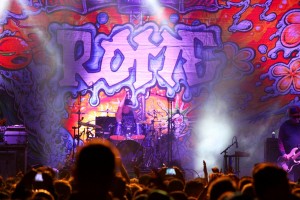 Sublime with Rome rock the house in Chicago.

Nowell’s untimely passing in 1996 was two months before the self-titled Sublime album was released. Taking this into account, he never had the chance to perform many of the smash hits from the five-time platinum album in live scenario. The sing-alongs felt like a wholehearted bona fide tribute to Nowell, bridging all the generations of Sublime enthusiasts.

How did I know the old school (grown up ’90s kids) from the rest of the flock? They were the ones going to the concessions stands or the restrooms, most likely on account of the SRW tunes not being on their ’90s playlist, subsequently missing the fresh sounds that Ramirez really flexed his own genuine flavor.

Songs included “Sirens” (featuring Dirty Heads) and “Wherever You Go” from their recently dropped album titled Sirens. The sound very much fits into the Sublime pedigree but with a morphing of a poppier reggae harmony and traditional punk reggae sound. Odds are in new SWR tracks favor to become fresh anthems that old/new school fans could both add to their personal music rotations.

If your only goal was to hear a lot of original Sublime songs performed live in a large venue setting, you were not disappointed.  In the end, whether you’re considered a SWR zealot or a Sublime aficionado, all fans alike swayed the night’s melodies and sang epic lyrics we all grew up to from one decade or another.