The power from a punch doesn’t come from your arm. You would think, like most people do, that the majority of your power when throwing a punch is all in the arm, and like most people, you would be wrong. The strength and leverage come from your feet. Your stance. Your base. It’s the subtle difference between a knockout caliber punch and a glancing slap. The feet are the base. The foundation from which a whipping punch travels from your toes to your knees, to your hips, up your back, through your arm and out your fists as you target past what your trying to dismantle. Much about life can be attacked in this way, and for Hall of Fame Boxer Sugar Ray Leonard, his punches are now coming from a different type of foundation. His knockouts are coming from The Sugar Ray Leonard Foundation and their fight against Juvenile Diabetes. This year the “Big Fighters, Big Cause” event, in its fifth year, honored Alfred Mann.

Although Mann is not a boxer, he is a fighter in the fight of the century, against Cancer and Diabetes. Alfred Mann, an Entrepreneur and most importantly a Philanthropist, who has made a name for himself in the Biomedical field with his patents, inventions and donations, was being enshrined for his many contributions to medicine. As CEO of MannKind Corporation, the newest benefaction by Mr. Mann is an inhalable insulin delivery system. If approved by the FDA (it more than likely will be) he will be why children with diabetes need not fear the needles anymore. This is why Sugar Ray Leonard had his famous friends come out. This is why the fighters came to show love.

The bulbs flashed as the questions came flying at Sugar Ray, the first to walk the carpet, as he made his way down press row. The immediate thought that hits you when you meet him is that the man is still charismatic, and whole heartedly sweet. It’s difficult to understand how he used to beat people up for a living. He fielded question after question about the state of boxing, but my favorite answer of his was in response to the question about whether children should be steered away from boxing and full contact sports due to fears of brain injury…He simply and eloquently said, “no.”

He went on about how “boxing is a poor man’s sport and someone in some undeveloped neighborhood will always be willing to do it”….OK, it wasn’t so much the answer that I loved, although it was a great answer, it was more the way he said it, with a smile and a twinkle in his eye that said more than the words. His eyes said for as long as there is a fight to be had, someone will always be willing to do it. That seemed to be the theme for the night, kids need to be willing to fight for themselves along side the medical world by getting out to play more and watch their diets to combat Type 2 Diabetes. That seemed to be the consensus from Leonard all the way down to Tommy Chong (Yes, Tommy Chong of Cheech and Chong fame. He had some interesting things to say about the fast food industries and Monsanto, and their part in the blame for all the garbage in the food causing the obesity and Diabetes epidemic in the U.S.). Type 1 is not such an easy fight, but with Alfred Mann’s new contribution to medicine, kids have a better weapon to strong arm the disease.

This foundation brought out the who’s who of boxing legends to weigh in on the state of everything that has to do with the foundation, especially boxing. Oscar De La Hoya, who was as polite as one can be, given his roller coaster year, said that he believes in the state of boxing, but that the caliber of boxers coming up now, aren’t like the ones he came up with because of a lack of discipline. I agree, no one wants to put in the work to become a superstar. Everyone just wants big money fights, not the Come-up fights.

Mike Tyson had some poignant things to say about the state of boxing due to promotion companies, which was great considering that he is a new promoter himself. According to Mike, the promoters have ruined boxing in so far they no longer allow the best fighters to fight the next best fighter because of a fear of losing the cash cow that is, a winning fighting. It’s not like the days when Iron Mike was running through every one of his contenders as he became a Hall of Fame fighter.

Speaking of Mike Tyson, Holly Robinson Peete was in attendance to support Sugar Ray’s Foundation, and her knowledge of boxing was limited but she said the first boxing match she ever witnessed live, was the Buster Douglas-Mike Tyson fight in which Tyson lost in an upset knockout. I mean come on! What a fight to have you first boxing experience on. That would be like someone saying, “Hey dude, I’m going to take you to this band tonight, no big deal they’re cool,” and when you show up, It’s Led Zeppelin or The Beatles…like What?! 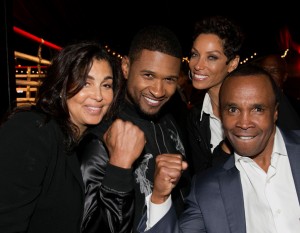 Anyway, The night continued and so did the celebrity love. Oh and after all this hoopla, there were actual boxing matches. There was a Heavyweight knockout, a Junior Middleweight split decision, and a Light Heavyweight stoppage. It was a good time. The vendors were set and pushing their products with scantily clad women adorned in boxing regalia and sneakers. The silent auction went on without a sound, the open bar did not close and the Santa Monica Pier was still made of wood.

The night was great, the foundation was a hit and the people who supported this great cause did their part in delivering an overhand right on a disease that doesn’t count the rounds like we do.