Last night Warner Bros. and DC Entertainment dropped the first full trailer for their upcoming Suicide Squad movie and it might just blow Batman v. Superman: Dawn of Justice out of the water.

First things first though, whoever cut the trailer clearly had the style and tone of Guardians of the Galaxy in mind. Everything from the pacing to the classic rock song playing over the top runs like a Valentine to Marvel’s black sheep. That is quite fitting because that’s exactly who the Suicide Squad is in the DC Cinematic Universe. If that is the style they are aiming for they hit it right on the money.

We also finally get a clear look at the personalities of at least some of the Squad. One can’t help but notice just how much screen time Will Smith seems to have in the trailer, let’s hope he shares some of that with his cast mates. This film will only work as an ensemble piece. If Smith goes diva it could tank the whole production. 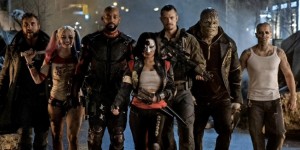 The Suicide Squad is ready for action.

The other wild card is Jared Leto’s Joker.  Even though he will probably end up with the least amount of screen time his performance actually matters the most in the movie. Every actor to play The Joker has left a legacy behind.  Heath Ledger’s Joker was so powerful that it sticks with many as the definitive version of the character. Leto must be given props for going the exact opposite in his characterization but it’s still a gamble. Margo Robbie on the other was born to play Harley Quinn. You could make a whole movie about her and it would be fun, don’t think DC isn’t thinking about it.

Suicide Squad seems to  be DC’s way of experimenting with their shared universe. They have had tons of practice in their animated division so, in theory, this should be a cake walk. They are unfortunately in the awkward position of being second place in just about everything. Marvel has beaten them to the punch so many times in so many ways and has such a head start on them that it isn’t even funny.

That being said there is still hope for the DC Cinematic Universe and that seems to lie in both Suicide Squad and Wonder Woman. Batman v. Superman, near as it is being marketed, is playing it straight. That’s fine and works perfect for the characters it is presenting but may not engage the audience on the same level that marvel has been doing. Will it pull it off? Thankfully we only have to wait a few more months to find out.