During the San Diego Comic Con this past weekend, the trailer for the highly anticipated Suicide Squad was released featuring plenty of footage that had fans going crazy. Now you can see it for yourself.

As one would imagine, the trailer for the much anticipated Warner Bros. film is dark and terrifying. The trailer features plenty of shots from the main characters—including Margot Robbie’s Harley Quinn and Jared Leto’s Joker. 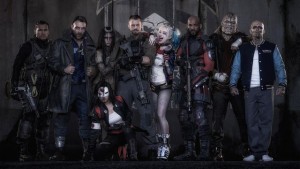 The Suicide Squad ready for action.

Previously, Jack Nicholson and Heath Ledger had portrayed the Joker—whom both gave legendary performances. However, in the Suicide Squad trailer, we see Leto’s version of the Joker with a drastic makeover. Leto is sporting grills and numerous tattoos, which has been met with criticism by many.

Despite the backlash, the Dallas Buyers Club actor looks extremely creepy! But Leto is only part of the story. The film also marks the first on screen appearance of Harley Quinn who looks like she might just steal the show from the already stellar cast that includes: Will Smith, Jai Courtney, Scott Eastwood, Joel Kinnamen and many more.

After the success of Marvel, many are worried that DC’s shared universe may not be able to compete. But after the one, two punch DC showed by dropping both the new Batman v. Superman: Dawn of Justice and the Suicide Squad trailers this weekend a lot of people have begun changing their tune.

The upcoming Warner Bros. project will be released August 5, 2016. Are you excited to see the Suicide Squad debut on the big screen?