Sundance 2015 has brought us a refreshing offering of independent films and strong performances from faces both familiar and unknown, from festival mainstays to first-timers.

One thing I’m noticing more each year is that there is an emerging resurgence of independent film success. This year’s Best Picture race is dominated by indies, all of which premiered at a major festival (the first time this has happened since the Academy expanded its Best Picture nominee race to more than 5 films). It’s films like last year’s Whiplash which buyers are looking for at Sundance: it wins the audience and jury awards at the festival, it puts a new director on the map, and produces an all but guaranteed Oscar to its supporting actor J.K. Simmons.

This year’s lineup was no different, with breakthrough performances, a stronger competitive lineup than we’ve had in a long time, with a handful of films pushing familiar actors in new directions. Sarah Silverman took a dramatic turn in I Smile Back, James Franco pushed his limits playing a gay activist turned conservative pastor in I Am Michael, Sundance founder Robert Redford stars in his long-awaited comedy A Walk in the Woods with Nick Nolte, and Cobie Smulders, who audience know from either TV comedy How I Met Your Mother or in Marvel as a member of SHIELD, starred in two dramatic competition films this year.

With hundreds of films to go through, there were a few that stood out this year: 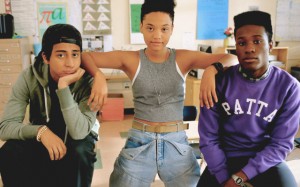 Refreshing, exhilarating, and uplifting, Dope is Rick Famuyiwa’s epic tale of a geek growing up in the dangerous suburbs of Los Angeles and navigating the unpredictable world of drug dealers, gangs, and college applications. When he gets himself caught up in a deadly situation with a local drug dealer, he and his two best friends must find a way to survive.

The film is jampacked with 90s hip-hop references, and an assortment of unique and quirky characters thrown into serious situations that end up in comical ends, all to the betterment of our protagonist on his way to bolstering his Harvard application letter. Famuyiwa creates a fresh take on the urban tale, in an almost Wes Anderson meets Edgar Wright style of kinetic energy, deliberate storytelling that is some of the most original we’ve seen in years.

A couple (Adam Scott and Taylor Schillling) moves to LA with their young son wondering how they will make friends and fit into a new culture. They are invited by a neighbor (Jason Schwartzman) and his wife to come over for dinner, and the couples and their sons have an immediate connection and friendship forms. But when the night begins to spiral from weird to absurd, the guests begin to wonder if perhaps the LA couple has ulterior motives that will put their relationship to the test.

The film has moments of hilarity, including a scene of full frontal nudity of Scott and Schwartzman (albeit with VERY obvious merkins). But while the film takes place over the course of one night, and runs a mere 80 minutes, its does lag a few times and the awkwardness of the scenario wears thin. But Writer/director Patrick Brice is one to watch, as his no holds barred story doesn’t hold back for a second and isn’t afraid to push the limits of awkward humor. 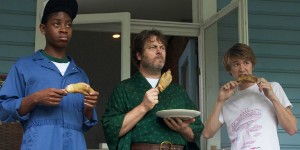 Me and Earl and the Dying Girl

The very deserving winner of this year’s U.S. Dramatic Jury and Audience awards. The dramedy based on Jesse Andrews’ book of the same name follows a high school senior whose mother pushes him to spend time with his classmate who has just been diagnosed with leukemia.

The resulting friendship will teach him more about life, relationships, and himself than he ever expected. Director Alfonso Gomez-Rejon is no stranger to themes of childhood cancer, having directed the pilot of the Fox series Red Band Society, and he puts together an extraordinary film that touches on the difficulties of the teenage years coupled with the complexities of a deadly disease. The humor infused in this tragedy, and the main character’s insistence that it does not end with the young girl dying, makes it all the more powerful of a story.

A realistic portrayal of psychologist Philip Zimbardo’s controversial Stanford experiment in which subjects were put into a fabricated prison scenario only to take on the roles of prison and guard to far more serious consequences than ever imagined. A strong cast of next year’s stars to watch include Tye Sheridan, Olivia Thirlby, Thomas Mann, Ezra Miller, Johnny Simmons, and Moises Arias. The film won the dramatic screenwriting award.