Glorietta Launches Tour At The Troubadour

Glorietta began by fate during a “tequila-soaked jam session” and much of that energy could be felt on Friday night. Rolling through their debut (and possibly only) record, fans of the band’s notable members also enjoyed a few solo songs to fill out the night. Moving on and off stage, from sentimental guitar ballads to quick paced country-rock, there was no formula for the show, much like the album – and somehow they both worked brilliantly. 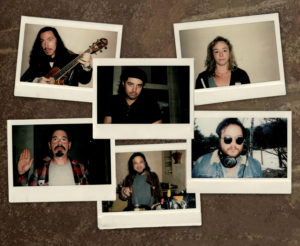 Watching Glorietta on stage was like watching a bunch of friends who were in a band in high school play a reunion tour as well-rounded, successful musicians. The energy of the night extended from the musicians on stage all the way to the fans in the back jamming along at the small tables behind the bar. David Ramirez ran around the stage like it was a jungle gym – Noah Gundersen and Matthew Logan Vasquez jumped into the crowd mid-song still strumming their guitars. Kelsey Wilson’s effortless voice and gorgeous violin elevated the songs beyond their recordings to levels that made the often noisy crowd stand at attention.

The show was a sneak peek into what must have been the most epic, booze filled recording session that brought the band together in the first place. Rounding out the night before their encore, Glorietta pointedly covered Garth Brook’s Friends In Low Places, the perfect encapsulation of the night, the band and the crowd, who stayed around beyond the encore just to hang out with their friends on stage a little longer.