As any competition nears an end, tension run high – and no one knows that better than the top 16 remaining dancers on Fox’s So You Think You Can Dance.

This week the top 18 performers, nine stage dancers and nine street performers, gave it their all dancing in teams of two or three as different characters. While many of the dancers gave interesting and impassioned performances, the stand out for the evening was Virgil Gadson and Hailee Payne, who blew America away as robots from space with crazy and well thought out robotic moves. Truly committing to their characters, Virgil and Hailee acted like robots until the moment they left the stage following their performance. Judge Nigel Lythgo told the audience during the show, their performance would be talked about for years to come on SYTYCD. His words shocked the team.

“That’s just unbelievable,” Virgil said on the red carpet following the live show. Hailee agreed saying, “I mean, I really couldn’t believe it. My face probably told it all. The surprised look the whole time.”

Of course with any competition show, someone must go home, and this week Burim Jusufi and Moises Parra just couldn’t win enough votes to remain in the competition. But though their journey with SYTYCD has come to an end, they have no regrets about their performance this week, or the competition in general.

“I feel like every time I walked onto that stage I really gave it my all,” Moises said on the red carpet. “I left my mark here on this show. I’m really proud of everything I’ve accomplished and I don’t regret anything.”

The judges chose to save Asaf and Edson, but on the red carpet following the show, Nigeil Lythgo confidently said that if Asaf’s attitude and performance didn’t change by next week, he’d be the next contestant packing. “Unless he’s improved massively and America saves him, he’ll be going home next week,” explained Lythgo. “It doesn’t matter whether you point your toes or you you’ve got a flexed foot. If America loves you, they’re going to vote for you. It’s just ‘wow I like you’” 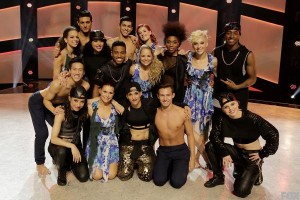 As we dwindle down to fewer and fewer dancers each week, fellow judge, Jason Derulo, predicts that many of the dancers that are seemingly ahead will fall back.

“There are a couple that are doing well in each category. But as the weeks keep coming, you know people are going to start to lag off. There are people ahead right now, but as the weeks progress, we’ll see who are the true winners.”

So You Think You Can Dance airs Mondays at 8pm eastern time on FOX!