The streets of Hollywood were definitely mixed with a coalition of enthusiasms, anticipations, personalities, moguls, and most of all movies during the 2015 Turner Classic Movie, or TCM Film Festival, occurring this past week.

Having gained ground for it’s plethora of classic cinema at a feature of no less than seven screening venues, this year’s TCMFF saw a zenith status of film buffs, tourists, and more who attended the screenings, no doubt paying most of their savings just to simply get the good look, as they did. This is usually worth it though, as the red carpets are painted with the glitter of Hollywood personalities that show up – this year marking appearances by Michael York, Sophia Loren, Christopher Plummer, Shirley MacLain, and Jeanie Dryden, to name a few. However with the programming, the festivities, the panels, and the availability of seats was something a little more mixed than the patrons thought should have been.

Indeed, the prices skyrocketed from last year – which was unusual because the more people should have been coming, would well have seemingly created discounts, groupons, or other sales ideas, but alas none were presented. There is a general level of unfairness to this practice that I found myself deeply sympathizing about with my fellow patrons. There was a feeling that the heads of the festival were trying to limit the engagements and create a smaller atmosphere for all those in attendance – which makes sense for the prices to be raised as they were – but the people in turn received less bang for the buck that they should have. 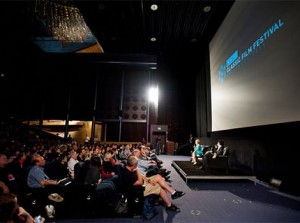 Many patrons were even forced to cut favored screenings short so that they could simply make the next planned one. In many cases, and these directly from people I spoke to, the planned movies were not attended, nor were there any compensations by the staff and/or programmers for the concerned patron.

To be honest, I found this year’s festival to be nowhere near as efficient or organized as the festival has been in recent years. The finer of it was that some of the titles shown were great choices: A Man for All Seasons, The Man Who Would Be King, The Wind and the Lion, The Miracle Worker, The Picture Show Man, among others thrilled and treated audience to miraculous 35mm presentation, or so the programs being passed out led patrons to believe.

The previous mentioned titles had been shown recently, some of them as recently as last year’s festival, while The Wind and the Lion pro-ported to be from a fabulous archived 35mm print was snafu’d at the last minute and replaced by a general DCP – right there with director John Milius in the audience! These kinds of irregular happenstance are not what patrons paid their hard earned money for. The idea of classic cinema representation should be one of elegance and class and refined circumstance, yet the walls of some venues were dripping with the shocking recall of unprepared premise, fair weather compromise, and absolutely no help from the organizers to assuage the ever growing restlessness of the public.

I only hope that next year an entirely brand new roster of featured films will be presented, the schedule will be air tight and not as sloppy, the dedication to film preservation and 35mm archive will continue to soar and the overall experience will stand as a better representation of what Turner Classic Movies is designed to exist as.