Press Pass LA had the chance to live like a celebrity during this years Teen Choice Awards! We were invited backstage to the “Celebrity Retreat” where we saw first hand the amazing gifts al the celebs would be taking home! No need for envy – we’ve got the inside scoop!

The über glamorous room featured countless surprises for the Teen Choice Awards nominees and guests. Here were some of the celeb favorites!

Sunday’s show was hot, hot, HOT! The best way to cool off was with Jamba Juice’s brand new Cold Press Juice Blends! The real fruit and vegetable juices were the perfect way to cool off after walking the scorching blue carpet! Pretty Little Liars star Janel Parrish was a big fan of the mango limeade – and we were too! Delish!

Another way the stars were able to feel comfortable, literally, was with Dearfoams slippers. The slipper company just released their Fall 2015 line specifically designed for teens and tweens, and many stars took advantage by ditching the heels! Baby Daddy star Chelsea Kane even left an inspirational message to her fans while trying on the comfy footwear. 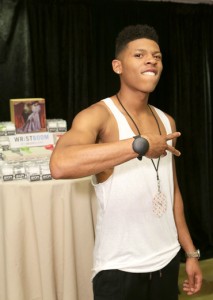 One of the coolest, and newest, products in the Celebrity Retreat was also the most portable! Stars just loved Wristboom, the wearable bluetooth speaker. Set up like a watch, you’ll be hearing your beats all day with this speaker! British pop star Yazz was a big fan!

And no backstage party would be complete without a fun photo booth! The Buzz Bug provided the coolest emojis for stars to let loose and let their personalities shine for the camera. And The Buzz Bug is an amazing website for the celeb obsessed. It takes your favorite stars social media feeds and puts them in one spot for easy stalking – we mean browsing! Girl Meets World Sabrina Carpenter star had a blast at The Buzz Bug photo booth!

What a fun way to chill during the 2015 Teen Choice Awards!