Fan boys and fan girls of the beloved franchise can rest a little easier; director Jonathan Liebesman’s latest installment of the Teenage Mutant Ninja Turtles isn’t nearly as terrible or insulting as some were dreading!

Whether or not it’s a bad movie, however, is still a matter of conjecture. 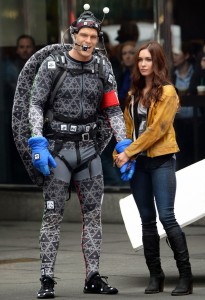 The story centers on the story of April O’Neil, played by Megan Fox. April is tired of doing nothing but human interest pieces for Channel 6 news. In a fit of desperation, she stumbles into a hostage situation and is saved by the title characters of the film. What follows is an actually somewhat complicated, albeit still predictable, plot that will keep the audience entertained.

Unfortunately, one cannot judge this film without comparing it to the vast amount of source material that came before, particularly the previous films. As such, there are both positive and negative things that can be extracted. First and foremost, Megan Fox actually did a great job at portraying the intelligent, no nonsense reporter without having to fall into the clichéd plot device of the damsel in distress. As a matter of fact, she saves the turtles on more than one occasion. However, the absence of side character Casey Jones, replaced by editor-in-chief Verne, played by Will Arnett, was an obnoxious choice. One character that has always defined Teenage Mutant Ninja Turtles was the Shredder, and this film, while doing a good job of demonstrating of who he was as a human  still showed him as a monster capable of unleashing a devastating flurry of physical attacks.

The design of the turtles themselves, as well as most of the CGI used in the film, while seamless was both distracting and aesthetically unpleasant. The fault wasn’t in attempting a completely original design, but the details lacked a greater refinement. They all had a distinct, unique look, and, unlike previous incarnations, they actually resembled what would be considered a mutant. However, the faces are distractedly deranged.

The fault in the movie is nothing to do with cheesy acting or hokey dialogue; balancing more than improbable martial arts action and cheesy, child friendly comedy has always been at the very heart of the show and previous films. The only significant fault is questionable cinematography. The opening scenes suffers from some of the worst “shaky cam” in recent memory, and even though the camera was at a distance enough to view and appreciate the fighting going on, it was going too fast to appreciate the finer movements and motions.

There was little bad in this movie that didn’t have something good to go along with it. The cinematography left something to be desired at times, but there were some truly spectacular shots and some very impressive fight choreography. The acting was a little hokey from time to time, but the plot was legitimately interesting. The heroes were a little bland and clichéd, but the villains were interesting enough to keep the story moving forward. As an avid fan of the Teenage Mutant Ninja Turtles since Eastman and Laird first penned their comic back in 1984, and an outspoken critic of Michael Bay’s body of work dating back to Pearl Harbor, I looked for reasons to dislike this movie. 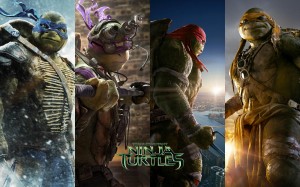 Aside from committing the egregious sin of daring to violate nerd’s nostalgia, the newest installment in the 30-year old franchise is no more silly, awkward and soon-to-be-dated than its predecessors. As a standalone movie with no prior knowledge or references to the ninja turtles, one will actually find some fun things to enjoy about this movie as an above average popcorn action science fiction movie. Fans of the original films, while not being completely satisfied, will not feel completely violated either. There are far worse remakes and sequels to movies out there; this film, while far from perfect, deserves a fair viewing.