THE 2016 BEYOND WORDS PANEL A MASTER CLASS IN SCREENWRITING

If you consider yourself a screenwriter of any kind you owe it to yourself to go to the Writers Guild of America’s annual Beyond Words panel.

Each year the event brings together the writers that have been nominated as potential Best Picture winners.   A single discussion with any of them would be insightful but watching them interact with each other opens up treasure troves of knowledge into the world of screenwriting.

Writer and director John August moderated the discussion bringing to light some hard truths about the industry. When questioned about how long it took for each of their films to reach the big screen from the first written page to opening night it was not uncommon for the answer to be along the lines of decades rather than years. Phyllis Nagy, for instance, noted that Carol had been locked into development hell for over two decades before seeing the light of day. In contrast Goddard was in the process of adapting The Martian before the book itself was properly released. 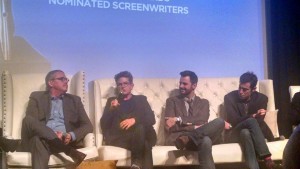 As the night progressed trends began to take shape. Since most of the films being nominated are based on real people cracking the story while still giving respect to the people became a hot issue. “I try and stay as far away from the people as possible when I write,” explains Randolph of The Big Short. “Since I was directing it as well as doing some writing there was no way I couldn’t talk and meet the people involved,” notes McKay.

Sorkin and McNamara were forced to try new tactics since their subjects were no longer alive. In both cases the story really took shape after talking to the children and family members of their characters. The topic became a bit more muddled when the focus switched to Spotlight, a film that gets to the heart of what means it to be a journalist.

When asked by an audience member whether they feel it is okay to add drama to a real life situation for the sake of the film Sorkin boiled it down “What journalists do is take a photograph of a situation, we create a painting.”

The Beyond Words panel is an invaluable resource to the film community and one that continues to grow in popularity each year. Though tickets sell out fast if the opportunity presents itself make sure you are there to soak up the knowledge of truly legendary wordsmiths.