Last night the 3rd Annual Sci-Fest kicked off its second round of programming with a brand new set of one act plays at the Acme Theatre in Los Angeles.

“Although science fiction is obviously very big on TV and film it hasn’t been done much in live entertainment. It is, to my knowledge, the first and only festival that has done this kind of entertainment. Each year we solicit and get new original pieces from all over the world and we get these wonderful designers and directors and great actors to come together and it’s become a big hit,” explains founding producer David Dean Bottrell.

Indeed the festival has quickly gained a cult following and it is easy to see why. Taking the basic premise of The Twilight Zone the festival has created an anthology of stories that truly bends the medium of theater. Much of that is due to the expert work of the fantastic cast and crew that somehow find a way to turn a single stage into half a dozen different and unique locations that truly take the audience to other worlds. 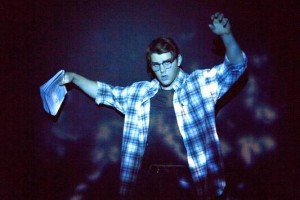 J.T. Neal is the mysterious Michael in Certain Unexplainable Events.

Yet it is in its simplicity where the genius lies. Each of the plays uses a no more than five people and never leaves its single room setting.   The night itself started out with a genius of a piece called Love Life Alpha, written by Nathan Wellman and starring Angeline Rose Troy and David Blue with the voice of David H. Lawrence XVII as the voice of the all-knowing super computer Alpha.

“I grew up doing theater on the East coast and you need to connect to the material. You need to trust in your director and the other actors on stage. In Love Life Alpha one of our characters is never seen so it’s been a challenge connecting to something that isn’t there,” explains Troy.

Though Alpha is an ensemble piece, Troy’s performance adds so much depth to the piece that it is instantly moving. The same can be said for Certain Unexplainable Events, the piece that followed it. Using a cast made entirely of teenagers and only a spotlight the one-act told the story of a boy that may or may not have travelled to a different dimension completely from the perspective of his friends witnessing the event. It might just be the first found footage one-act play. 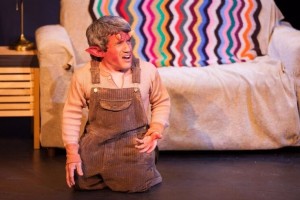 Mark Povinelli plays a tortured demon in Jack and The Yattering;.

Like a mind-melting mixtape, the night’s shows got increasingly weirder eventually leading up to The Yattering and Jack which was as good as any Buffy the Vampire Slayer episode. The shear energy of the piece made it somehow fun, scary and totally believable all at the same time.

If you consider yourself a lover of theater or science fiction this festival should not be missed. There’s still plenty of programing to check out all month too so don’t think you’ve missed out.