THE 5TH WAVE DROWNS IN ITS OWN MEDIOCRITY

The new movie, The 5th Wave from director J. Blakeson (who will certainly need to remain anonymous after this fiasco) unconvincingly puts teenagers against unseen “aliens” who are attempting to take over the world in progressive measures, known as the “waves”.

The very idea is executed so preposterously, that even hired pros such as Maria Bello and Liev Schrieber are at a disadvantage for their appearances. The reasons are several but let’s highlight: Like most movies that are produced these days, there is simply way too much plot crammed in to the first 10 minutes. The biggest (and some would say, fatal) mistake. How are we supposed to maintain respect or empathy for characters when the director’s insouciance indubitably will not allow it? It’s insufferable and does not create a film universe that audiences will want to partake. However it doesn’t stop there.

Are teenagers these days in any real danger? What need would there be for them to venture an ARMY assault rifle, overthrow adults in disloyal insurrection, or contradict their parents by deliberate disobedience? In an anguish inducing Politically Correct arena of cinema which we have been thrust head first ever since 9/11, there has been a fog bank of nebulous indecency in regards to films that are produced for teenage specific audiences.

In the 1980s, teenagers watched Ronald Reagan take away their freedom of self exploration that many of their parents first introduced them to in the 1970s, and in the 1990s, a most certain angry period for teenagers, the residue of the war on drugs loomed in the air and provoked savage reprieve from the hormonal tykes that led to depth reaching teen pregnancies, drug usage, and finally, school shootings. These were eras in which teens were truly fighting for a place in society which allowed for great films to be centered on them. From John Hughes fare in the 1980s, to gutsier water treading like Darren Stein’s poignant irony in Jawbreaker, Wes Craven’s original Scream which mocked consumer idealism in the generation, and the Julia Stiles school of modern Shakespeare fantasy. 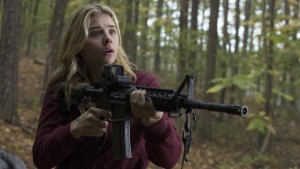 The direction is hokey and contrived. There are scenes which are evident in their attempt at impacting the audience on an emotional level, but the inexperienced touch of molasses, which director Blakeson smears into ever scene with aplomb confusion, swallows each moment in a whirl of laughing stock. This isn’t the 90s, teenagers with guns have no effect anymore, and electronic bumbling music hurts my ears. The digital effects are egregiously obvious, show blue outlines in the scenes which takes place “outside.” Come on people, this is as plain as seeing the man behind the curtain. Who did they get to do color correction on this thing?

The acting isn’t much better. Still on the way up newcomer Chloe Grace Moretz gives it her all, but it’s not enough. She stumbles through her own emotions not sure whether to display vulnerability or ferocity (there is also a major suspect for the fact that the actors who play her family are all dark complexioned brunette, and she’s a light toned blond). As stated above, the talents of Schrieber and Bello are completely wasted. Newcomer Alex Roe gives the most impressive performance, which though it’s not the best, he shows poise and star quality. If he keeps at it, hopefully the right role will come along. Nothing can be said for the rest of the cast.

The real crime of this most disgraceful production is the schmorgasboard of haphazard after thoughts which are so desperate and evident and wasted on selling the product. There are lingerings of Twilight, The Hunger Games, Ender’s Game, and many others that create a pastiche of mediocrity that couldn’t have been released at a more inappropriate time. It’s as if the writers of the film, who don’t even deserve to be mentioned in this review, thought that if they took the biggest teen films of late, and amped them up to make them as serious as they could, it would make the ultimate movie experience. It doesn’t work. The politically correct pattern of filmmaking that has infected the industry, and that justice at all costs need to release a movie under the R rating in effort to generate greater box office revenue negated any chance this movie had to even come close to being good.

Sufficed it to say, how any film is going to stand as a mark of the teen age through this dreck is anyone’s guess. Movies and how they present teenagers have progressed to a point that there needn’t be extremeties to seduce the audience. Still, as long as consumers continue to drown in cess pool movies like this one, the real battle for movies wages on.