Whew, that sounded stupid even just typing it out. ABC picked the two fallen ladies from Chris Soules’ season of The Bachelor, Kaitlyn Bristowe and Britt Nilsson, to go head to head for the chance to find love on national television.

As we all could have guessed, the two part premiere, that took place this week on Monday and Tuesday, was awkward to say the least. ABC really chose to amp up the discomfort level for both the women, the contestants, and the audience by having the guys a) choose who they were going to introduce themselves to first and b) by having both Kaitlyn and Britt stand only feet away from each other as they met all of the men.

I mean seriously, they couldn’t have put a wall in between them or something? That to me, showed that ABC does not really care about these girls, because what benefit did seeing each other hit it off with the other guys really do? Well it caused drama, thats for sure, but ABC could have at least tried to pretend they care about these women’s well being and sanity, just saying. However with that being said, it was pretty hilarious to see these girls looking like they wanted to rip each others throats out, while still trying to smile and look hot.

So basically if you go on the internet at all and follow the show, you would have known long ago that the guys picked Kaitlyn and sent Britt home packing. I was okay with this decision, however Britt did earn some points with me in the three hours aired. Although, this leaves so many questions, and I truly hope that ABC does not mess this up.

With this kind of curb ball thrown at the beginning of the season, we can’t just continue for the next two months pretending it did not happen. There are guys there that were super #ProBritt and voted for her without hesitation…so what now? This just proves how most of these guys just want to be on TV, they don’t care who The Bachelorette is. While this is typically the case and we all know this, its a little bit too much, and ruins any facade we had about people being there “for the right reasons.” We of course had to have one out of control drunk dude that either takes his clothes off or pees himself, and this season it was the glorious Ryan.

After slapping Kaitlyn’s butt, things really started to go downhill for the drunk hottie that actually used to date the winner of Juan Pablo’s season Nikki Ferrell! This is mostly alarming because if Ryan and Juan Pablo are two of her exes, I am terrified to find out who the rest are. We get a twist at the end, however, that we knew was coming (again thanks INTERNET!) which was that Britt’s love story is not over. As Kaitlyn was handing out the roses, constant Brady Toops pulls Kaitlyn aside to tell her he is going to go after Britt instead. 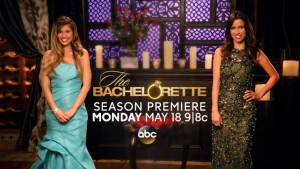 While there is no doubt in my mind this was totally scripted, I did like that we didn’t just drop Britt off the show, now there is hope. It is yet to be confirmed how much screen time Britt and Brady will get, but the show will be following their story as it continues to flourish. The two have been seeing many places together since with a camera crew so money is on the two dating, or at least pretending to for the cameras. Are you guys happy about the results? Excited for the season? All I know is its gonna be one wild ride….or a train wreck, and I can’t wait to watch!