THE BEST OF THE GRAND POINT NORTH FESTIVAL

The sixth annual Grand Point North Festival took place Saturday and Sunday along the Burlington, VT Waterfront. Vermont native, founder and co-host Grace Potter, who performed with her solo band both nights, delivered an unforgettable performance. Among the 10,000 attendees were a strong, local dedicated fan base and mix of festival vets and newcomers.

The festival hosted prominent and well-known artists from across the United States including Guster, Old Crow Medicine Show, The Record Company, Blind Pilot, The Wood Brothers, and Kat Wright & The Indomitable Soul Band, and many more.

Potter, known for her animated stage performances, brought the night alive with her magnetic dance moves, vibrant outfits and a voice that radiated similarities between the late Janis Joplin and Nina Simone. But it wasn’t only Potter that stole the show over the weekend. With two-jam packed days featuring non-stop live music, complimentary yoga classes, curated eats and drinks, Press Pass LA presents The Seven “Best Of” Moments at Grand Point North Festival 2016:

The Surprise Switch: Due to unforeseen circumstances, Basia Bulat was unable to perform Sunday; leaving River Whyless to step-up to the plate. The last minute switch brought the unconventional folksy-bluegrass rock tunes from the North Carolina based band to festival attendees enjoying the beautiful, sunny day. Known for their unexpected instrumental elements, the stand out moment goes to Halli Anderson and her unprecedented fiddle skills. Performing to a packed crowd Saturday at Nectar’s Grand Point North official after party, the band had time to prepare for their Sunday debut.

Dance Your Pants Off Moment: Beyoncé and Britney it’s time to step aside, there is a new Queen B in town; the six-piece bluegrass rock band Old Crow Medicine Show. Opening with the high-energy song, “Tell It To Me,” the crowd was captivated instantly began to dance and sing along. Hoots and hollers were echoed amongst the crowd after mandolin player, Cory Younts, stole the show. Younts busted out impressive clogging moves and high kicks to the fiddle-heavy “hillbilly” songs. 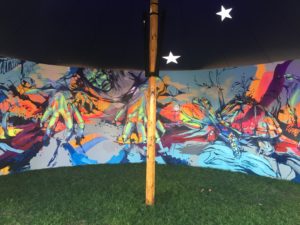 North Point Weird was a fascinating avenue for concert goers to explore between shows.

Incredible Eats: This was a tough one; although the curated selection of food was sourced from local Vermont restaurants, the top eats of the weekend go to Yak It To Me. The flavorful Buddha Burger with Garlic offered a traditional eat with unconventional flair; not only was it delicious and nutritious, but one of the greenest red meats available. This burger was definitely for the adventurous eaters out there.

Sweet Drink: SAP! The Maple flavored soda and seltzer is the perfect fall refreshment. Made with 100% pure maple sap, the naturally flavored seltzer would be best paired solo or with your favorite adult spirit, such as vodka or whiskey. Vermont is known for its abundance of maple-flavored products, but this is one that can be enjoyed over and over again.

Blast From the Past: Celebrating 25 years of amazing musicianship, Guster opened their set with “Long Night,” followed by other classic hits including, “Barrel of a Gun,” “Satellite,” and “The Airport Song.” There were only a few bodies sitting on the floor as the ecstatic crowd sang alongside singer Ryan Miller while percussionist, Brian Rosenworcel, banged on the bongos and cymbals with his bare hands.

West Coast, Best Coast: Blind Pilot, the six-member folk-rock group who hail from Portland, Oregon delivered a raw, soul-searching, heartfelt performance with songs off their latest release “And Then Like Lion.” The melodic, soft undertones of lead singer, Israel Nebeker are not only hypnotizing, but the meaningful lyrics behind his songs leaves little to be imagined. After the loss of his father and end of a 13-year relationship, the song, “Umpqua Rushing” is every bit emotional as it’s captivating. 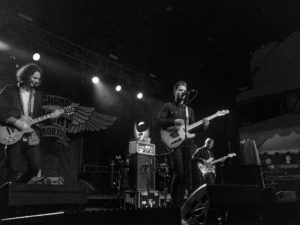 Kaleo blew audiences away during their set.

International Sensation: Formed in 2012, the band Kaleo, are the best-kept Icelandic secret. Delivering a high-energy, enthralling performance that grasped the audience and brought Grace Potter to the photo pit for a non-stop dance marathon with her friends and family. They kicked off the set off with the slow jam, “I Can’t Go On Without You,” but instantly kicked it into high gear and played some of their bigger hits including, “ Way Down We Go.” It’s obvious to see why these guys are skyrocketing to the top.

Be sure to look out for more updates and photos on Grand Point Festival 2016.