THE BROTHERS GRIMSBY NEVER QUITE HITS THE MARK

Sacha Baron Cohen has done it once again. However, The Brothers Grimsby was not nearly as hilarious as his other ventures into film.

Don’t get me wrong, the movie pulled out all the stops to make it your typical  Cohen made movie… plenty of vulgarity mixed with humor mixed with a somewhat solid story line. Brothers Grimsby is about two brothers separated at a very young age. Our main character, “Nobby” played by Cohen, is a low-class Brit degenerate who goes on a quest to find his long-lost brother Sebastian after learning that he is still alive. 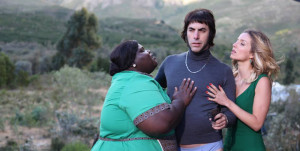 Sacha Baron Cohen does his best 007 in The Brothers Grimsby.

Upon locating his brother, Nobby manages to shoot a child with a life-threatening disease, kill the leader of the World Health Organization and unintentionally get his long-lost secret service brother framed for murder. The adventures these two encounter while on the run range from going to South Africa, to doing heroin for the first time, to hiding from the bad guys in an female elephant’s lady parts. I have no idea how Cohen came up with that concept, or even knew that two full-grown men could fit in that body cavity… but that is just ONE of the many perks of The Brothers Grimsby. Seriously, you HAVE to see it in person to understand it and be totally grossed out by it.

The manner in which the movie was shot was definitely different from what Cohen has usually done. It still has that Borat feel of home video footage, but Brothers Grimsby gave me the feeling that I was playing Call of Duty. It was packed with action, guns and plenty of explosions, but it also had just enough up close and TOO personal of shots where you remembered you weren’t in/watching a video game. For instance, and as I said before, this is just one of many instances, Cohen gives you a vantage point shot of Gabourey Sidibe’s ‘80s style bush and backside. I cannot make this stuff up!

Overall the movie was at times really funny, uncomfortable and totally badass. I would say I expected to laugh out loud a bit more, but then again I think the discomfort of some scenes might have taken away from the humor of it all. Go into The Brothers Grimsby with a light-hearted attitude, expect to get a bit squeamish and laugh very hard at a certain 2016 presidential candidate. Sacha does an amazing job at incorporating current events into The Brothers Grimsby.