THE CAST OF KINGDOM GETS READY FOR MORE EPISODES

AT&T ‘s original series Kingdom is coming back on June 1st at 9 p.m. ET/PT only on Audience.  The family drama series, set in the MMA (Mixed Martial Arts) world promises to bring plenty of blood, sweat and tears both in and outside of the cage. Warning: Spoilers ahead!

Frank Grillo, Matt Lauria, Jonathan Tucker and other members of the cast attended the premier of Season 2B in Los Angeles yesterday. Press Pass LA was in attendance and talked to Matt Lauria about losing his real father and his visceral performance a few months later in Season two finale where his character euthanized his sick father. Lauria talked about it softly and with tears in his eyes. He sighed and concluded “That’s life. What can we do about that, right?” 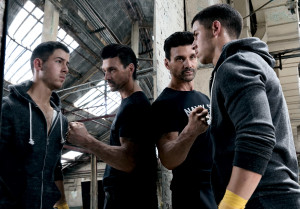 Paul Walter Hauser shared with us about the experience of having his head shaved on screen: “Byron (Balasco) wanted me to grow out my beard, and then we got excited about growing the hair out and slicking it back like De Niro in Cape Fear. Per usual, Byron wrote an amazing piece in which Jay Kulina shaves Keith’s head. As an actor, moments like that are why you get into this in the first place.” Hauser added “I love playing the character of Keith, because like the show, there’s a level of pain and unpredictability that are attractive to me, the actor, but also a TV audience. My hope is that people find spurts of humor from my character, amidst a pretty dark show. And hopefully they don’t give up on Keith. Things are going to get worse before they get better, as you’ll see.”

Season 2B opens with the complex drama continuing to unravel for Alvey Kulina (Frank Grillo) in his personal life and for Ryan Wheeler (Matt Lauria) and Jay Kulina (Jonathan Tucker) as they prepare for their upcoming fight against each other. The 1st episode paves the way for Alicia Mendez (Natalie Martinez) to get more in the center of the story in later episodes. Lisa Prince (Kiele Sanchez) and Christina Kulina (Joanna Going) were only referenced but did not appear in Episode 1. However, it was clear in the trailer that these ladies will be back in the season.

Season 1 Director of Photography Sidney Sidell is back and his cinematography is dynamic and beautiful. Beautiful, not in a fairy-tale, happy-rosy kind of way, but in a gritty, bold and true-to-life portrayal of real people in real life kind of way. The writing stays consistent and tight in building the story line, which is not always the case for a long running TV series with a big team of writers. The acting performance remains outstanding, both in its physical and emotional intensity. The performance is emotionally faithful to the the struggles that the characters face in pursing their career as fighters and in dealing with their internal demons and self identity.