The Danish Girl is irrevocably one of the most moving love stories of the 20th century. Tom Hooper directs this heartfelt story in a close quartered approach, that leaves you feeling you’ve intruded on a couple’s private life as opposed to watching a film for what it is.

Eddie Redmayne gives yet another stunning performance hot on the heels of The Theory of Everything. Joining him for this moving portrayal is the talented Alicia Vikander. Eddie and Alicia shine on screen. Their chemistry as Gerda and Einar Wegener is palpable. 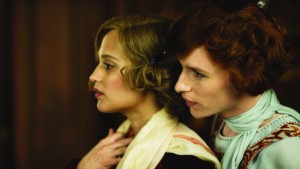 Eddie Redmayne and Alicia Vikander light up the screen in The Danish Girl.

Vikander’s ability to tap into Gerda’s never ending empathy and love for Einar as he struggles with his question of Lili is perfection. It leaves you questioning how far would you go for the one you love? More than a film of transgender, this is a film of true love. With Oscar buzz sure to descend from the heavens for the entire cast and crew’s hard work The Danish Girl will be a must see this awards season. It reminds you why so many artists go into film.

To touch on human emotion, our species great capacity for selfless love; is something everyone should be reminded of. This film took 15 years to come to life from page to screen. The result is a labor of love that shows what resilience can accomplish. Shot in cool intimate tones that mirror the loneliness and confusion you can see Einar/Lili (Eddie Redmayne) face, creates a painting behind the performance.

Watching The Danish Girl is like strolling through a very well curated museum. Every frame, every action carefully and skillfully placed within. Leaving you wondering if you just saw a film or an excerpt from history. Bravo to Tom Hooper for another humanizing take on great historic figures. His last film ‘The Kings Speech’ took a human look at familial love within the British Royal Family while The Danish Girl follows how far one marriage can endure changes of life altering proportions.