The Fate of the Furious One Fast Film Too Many

The Fast and the Furious franchise has seen a lot of ups and downs over the last 16 years. The Fate of the Furious, now the eighth movie in the series seems to have finally marked the point where the series jumped the shark.

After the passing of Paul Walker Fast Seven felt like the definitive end to a chapter with pretty all loose storylines tied up. It was a fantastic film that did justice to everyone involved and was a love letter to everything that made the series great. But then someone thought it would be good to make another one.

The Fate of the Furious picks up in Cuba with Dom and Letty living happily ever after on the island. It doesn’t take long before Dom’s paradise of hot women and illegal street racing is shattered by the appearance of a new villain with an axe to grind. Before long Dom has gone full rogue threatening the lives of his “family” and team.

In theory, that should be an epic movie in the Fast franchise. All the elements are in place for some fantastic action scenes and spectacular throw downs, especially since the film is determined to bring back pretty much every recognizable face in the franchise. But in its attempt to constantly up the stakes the film loses its soul.

Even when the team was doing high speed heists it still felt like the team was pushing the limits of what was possible with cars and doing something truly dangerous. But at this point in the game Dom and the crew have become so good and so unbeatable that they aren’t just some crew on the street that the audience is following  they are now “The Best in the World.”  That changes creates more of a James Bond feeling than the movies need and it feels like the audience is sometimes watching the wrong movie. 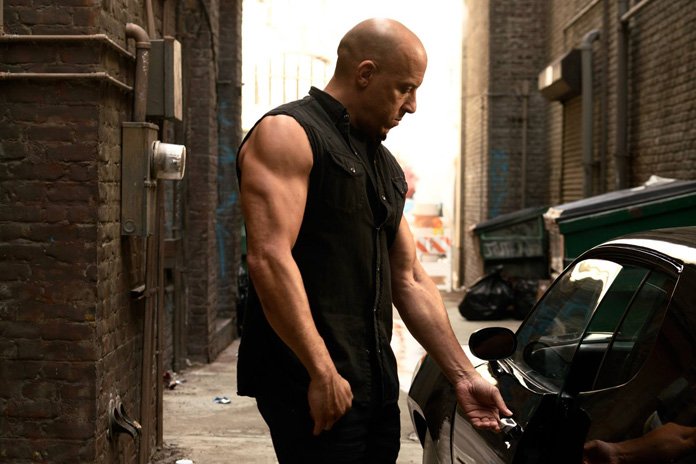 Instead of taking down underground drug dealers Dom and his crew have to go up against a truly ruthless super villain intent on world domination. The plot, once it fully unravels, feels more like an unofficial sequel to Dennis Rodman’s Double Team than Fast and the Furious. This is extremely baffling because the movie has managed to stack the deck with some fantastic A-list actors all of which were probably lured in by the goodwill of previous films. Where else are you going to find Dwayne “The Rock” Johnson, Kurt Russell, Jason Statham, Vin Diesel and Helen Mirren all in the same movie? Yet not even those heavy hitters can turn it into a good movie.

That isn’t to say it isn’t enjoyable, it’s very much a guilty pleasure. This is the kind of action that is so over-the-top and off-the-wall that it borders on camp. Granted, a certain amount of disbelief must be used in these films to really get them. When the crew had the massive climax on the runaway plane in Fast Six it didn’t make a whole lot of sense but it felt reasonable enough in context to roll with it. But F8 takes it just one step too far into the realm of fantasy.

Is Fate of the Furious worth watching? On Netflix or late night cable without a doubt. But there are better movies out there to see than a movie that feels like Fast and the Furious fan fiction.