Watching Star Wars: The Force Awakens is a truly magical experience from beginning to end and one that will satisfy fans of every generation.

Much of that is due to the careful eye of J.J. Abrams, a fan himself, and his ability to get to the heart of what made the original trilogy so good in the first place. Gone is the overabundant CGI that bogged down so much of the prequels. Instead it has been replaced with honest-to-goodness practical effects in a world that feels that at once new and familiar. 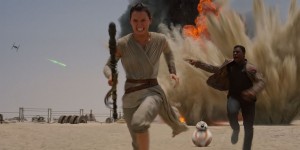 The story itself is well crafted and feels totally organic. With that in mind it is hard not to bring up the prequels in comparison. It safe to say there is more heart, soul and emotion in the first 10 minutes of The Force Awakens than there ever was in all the prequels combined. Right from the start the audience genuinely cares about its characters as each goes on their own journey.

The Force Awakens had a lot of baggage to carry and a lot of expectations to manage but it somehow does all of it effortlessly. Watching the old crew back in action, even after all these decades, just feels natural. The new cast does a lot of heavy lifting too juggling heavy drama and action with some truly funny moments.

More so, The Force Awakens kick starts a new generation in the Star Wars universe. The previous six films were good (except Phantom Menace and Attack of the Clones) but their focus always seemed so small. With Episode VII Abrams manages to crack the universe wide open by introducing new characters and bringing back some old familiar faces. Unlike Episode I-III which were too clean and polished The Force Awakens brings back the dirt and grit of the space opera that made the original trilogy so special.

That dirt and grime brings a realness to the reality that few science fiction and fantasy films have ever achieved outside of Alien, Blade Runner and Serenity. For that reason alone you should watch it on the biggest screen you can. You can almost feel the magic and wonder radiate through the screen.

What’s the final verdict on the long awaited sequel? See it. See it many times and show it to your children so they can understand the meaning of movie magic. J.J. Abrams has managed to catch that lightning in a bottle that was so prevalent in early Spielberg and Lucas films. There is a whole generation out there that has never experienced that wonder. It is time to change that.

Check out our PHOTO Gallery from the Los Angeles premiere.