THE GIRL IN THE PHOTOGRAPHS: MEET YOUR KILLER

This weekend Wes Craven will release the final film The Girl in the Photographs that, while he may not have directed, he executive produced and helped mold into a movie that has his trademarks all over it.

The movie brings a unique perspective on our growing narcissistic culture in a way that may seem harmless at first but deserves multiple viewings. Though not a direct sequel or spin-off it is fair to call The Girl in the Photographs a blood relative of Craven’s classic horror masterpiece Scream.

But a horror movie is only as good as its villain and Luke Baines is just the man you want in that role. Though most will know him as Cameron on the TV show Home and Away his performance in TGITP will surely draw him some well deserved attention. Baines turns what could have easily been a one-note slasher into a complex character and a truly twisted individual.

Press Pass LA sat down with Baines to discuss the film and how he approaches his career.

PPLA: Did you have to do any kind of research for your role as the serial killer? 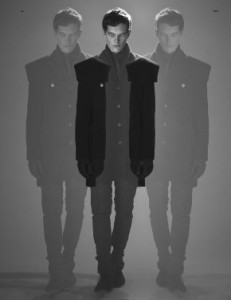 LB: The script itself, written by Robert Morast, Oz Perkins and Nick Simon, was so rich in content, my research for the role really started there. I was then lucky enough to speak to an incredible professor from John Jay College who was able to give me practical insight into how a killer of this nature would think and feel, and more importantly where he came from. One of the things he told me that really clicked was that he was born this way, with this urge to hurt women. And as weird as it is to say, that made me feel for him, being in this situation that he can’t control. From there, the rest of the pieces all just fell into place.

PPLA: Who were your inspirations in choosing how to play him?

LB: The biggest thing I wanted for Tom was authenticity. I didn’t want him to be a cardboard cutout “bad guy” because while that can be scary in the moment, for me it’s the characters who are the closest to real people that are the most horrifying – Anthony Hopkins in Silence of the Lambs with his morals and manners, Anthony Perkins in Psycho with his offbeat sweetness, and Robin Williams in One Hour Photo who’s caring and charming, all the while the three of them are stalking and killing people. That’s horror, and it’s those characters that stick with you and truly make you question the people around you.

PPLA: Do you prefer playing the hero or the villain? Why?

LB: I’ll take either as long as they’re not dull. I need substance. I can’t think of anything worse than playing the simple, happy guy. I need issues and layers, something going on under the surface, and if it wasn’t there I’d probably just create some secret bizarre issue that the character has to fill the empty space.

PPLA:  Wes Craven was executive producer on this, how involved was he in making the movie? 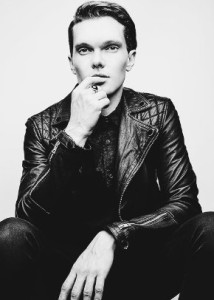 LB: He was really involved and hands on. Our writer/director, Nick Simon, was paired with him as a mentor through the WGA and that’s how Wes got the script. He asked Nick how he could help make it and came on board as the Executive Producer. From there he gave notes on the script, was involved in casting – as relatively unknown actors he had to fight for all of us -, watched dailies and was in the editing room right up until he passed away. It was such an honor to meet him, let alone be in one of his films. When he arrived for our first table read, I couldn’t believe it was him. He talked about how our script was the closest thing he’d read to the original Scream one, and I had to pinch myself. You could feel the energy around the room shift. In that moment, we knew we were apart of something really exciting.

PPLA: You have a background in theatre, did you find that it helped you with this role?

LB: Absolutely. I feel like it always comes in to play. They drill you so hard, there’s really no escaping it. There’s obviously specific elements around crafting a character and understanding context, circumstance etc, but I think the biggest thing I took from theatre is the discipline. It’s serious business and held in the highest regard, so you really have to show up prepared to do your work. There’s a certain level of respect to it that I try to bring to set. As much fun as it is to play dress up for a living, you also have a certain responsibility to be the best you can be.

LB: This was definitely a dream role. Stepping into the skin of such a dark, layered character. Moving forward, I’d be honored to do more of the same. I definitely have a soft spot for the tortured souls, there’s just so many places you can take them. But honestly, just to be able to make a living out of acting is the dream.

The Girl in the Photographs opens in select theaters and on demand April 1.