THE HATEFUL EIGHT A POLARIZING MASTERPIECE

The Hateful Eight from Quentin Tarantino might be a slow burn but it is also his most masterful piece of work to date.

Strangely, the film may also end up being his most polarizing. With access to Panavision lenses and 70mm film to work on the movie becomes something far more than just a normal trip to the cinema, it becomes an experience. That is of course provided you go to the Road Show version of the movie that will be touring in select cinemas this holiday season. 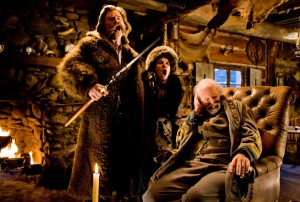 Kurt Russell, Jennifer Jason Leigh and Bruce Dern put in some of the best performances of their careers in The Hateful Eight.

The Road Show edition looks and feels like the kind of epic Western your parents might have seen in the 1960s and 70s. Before the movie begins the audience is entertained by the overture giving them time to savor the music and get to their seats. Just as the movie hits a major plot point the intermission sign comes up, giving everyone time to stretch and discuss the film. Since The Hateful Eight is basically structured like a play it makes total sense to bring back such a device and it’s more than a little refreshing. Whether or not modern audiences will have the patience to sit through a movie with an intermission should be very interesting.

One could talk for hours about the technical aspects of the film but that’s not what you came here to read. At its heart Tarantino’s The Hateful Eight is his rawest and most fine-tuned film since Reservoir Dogs. Just after the Civil War eight men find themselves stuck in a haberdashery in rural Wyoming. There’s the bounty hunter (Kurt Russell), his prisoner (Jennifer Jason Leigh), a hangman (Tim Roth), a cowboy (Michael Madsen), a driver (James Parks), the new Sheriff in town (Walton Goggins), a former Confederate General (Bruce Dern) and a Union war hero (Samuel L. Jackson).

The result is basically the antithesis of Star Wars, the other major film out on the market right now. There are virtually no special effects and tons of dialogue, but it works beautifully. Everyone manages to share the spotlight and watching acting powerhouses like Samuel L. Jackson, Kurt Russell and Bruce Dern play off of each other is worth the price of admission alone.

Seriously, Kurt Russell and Samuel L. Jackson need to do a lot more movies together. Their chemistry could carry a straight-up action film to the top of the box office based on attitude alone. Jennifer Jason Leigh does more than hold her own as the recluse prisoner with a secret. The only one not given nearly enough screen time is Michael Madsen as cowboy Joe Gage. Madsen used to be a force to be reckoned with but age has caught up with him and he’s just not as scary as he used to be. This movie is an excellent chance to get him back into the public spotlight and into better roles.

The film allows archetypes to clash while somehow also dealing with issues like PTSD, war crimes, racism, sexism and the concept of justice head-on. Though sold as an action movie Tarantino has managed to create a master class on the nature of violence.

At its core The Hateful Eight is mystery with a bloody, gruesome payoff. To give away any more would ruin the fun. Though not playing everywhere, audiences should at least try and seek out the Road Show edition of the film since that is the way it was originally intended to be shown. The quality of the film looks amazing on 70mm giving the movie a texture and depth that just isn’t available on digital. Film purists will be heaven.