THE HOLLYWOOD FRINGE FESTIVAL GOES CAMP WITH NILBOG: THE UNAUTHORIZED PARODY OF TROLL 2

Some amount of camp is to be expected at the Hollywood Fringe Festival, a nearly two week event that puts the spotlight on some of the lesser known productions that happen in Los Angeles. NILBOG: The Unauthorized Musical Parody of Troll 2 delivers just that and more.

The production is a homage of sorts to what is widely considered to be one of the “best worst movies” ever made.  Whether you’ve actually seen the movie or not is irrevelent because the cast and crew do such an amazing job of bringing the absurdity of the film to life. What’s even more impressive is that they do it in the relatively small confines of the Three Clubs bar and nightclub. 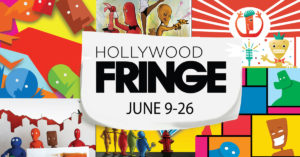 Ingeniously the creators decided to use that to their advantage by making the play interactive. Taking a cue from Rocky Horror, the audience was encouraged to take drinks every time the word goblin was mentioned and throw food on stage at certain points. It created a level of chaos that would make the Marx Bros proud.

Much of this is due to the supremely talented cast which has no problem embracing the campiness of the situation. The movie itself is a lesson in weirdness and over-the-top acting. It makes total sense that the cast and crew would take that vibe and push it to its natural extreme. The end result is an hour long comedy filled with homoerotic innuendo, a rap battle and a crazy amount of musical numbers.

The Hollywood Fringe Festival is all about an appreciation for the stranger side of theater. Playing in bars and theaters across Hollywood the fest is a fantastic showcase for actors and directors that might not otherwise be seen in the mainstream. If you consider yourself a fan of theater at all get out there and see one of the plays.