The Homesman, Tommy Lee Jones’ second effort as director and co-writer, is a strange hybrid of a film that never quite seems to work.

Based on a novel by Glendon Swarthout it tells the story of Mary B. Cutty (Hillary Swank) a strict, independent woman in the Nebraska Territory that has volunteered to bring three mentally ill women across the wild country to a church where they will be cared for properly. 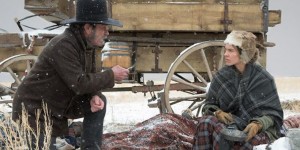 Along the way she meets George Briggs (Tommy Lee Jones), a somewhat crazy drifter that is willing to help her transport the women in exchange for the promise of money. This rather minimalist plot serves as a microscope that allows viewers to experience not just the hardships of the frontier days but its social and political views as well. And it works, for the most part.

The fact that all of this is done using A-list actors and a release date in mid-November means that Jones is, without a doubt, hoping for some Oscar attention. The only problem is that the movie itself ddoesn’tactually earn it. Though beautifully shot with a riveting score and a cast that could, and should, win all kinds of Oscars the movie falters under Jones’ direction.

Given the subject matter it is surprising how unintentionally funny the movie can be, something Jones probably wasn’t looking to do. The problem is that Jones has cast some truly amazing thespians and essentially told everyone to tone it down, everyone except himself. This allows Jones to really embrace his rambunctious frontiersman  role (something he can do in his sleep at this point) without being overshadowed by the rest of the able cast. He does a great job as Briggs but it comes at the cost of what could have been some truly great performances from everyone else.

This becomes apparent with the casting of Miranda Otto and Meryl Streep. Both actresses have the ability to give truly groundbreaking performances but, in this case, Otto barely gets to say a word in the film. Streep plays the caretaker of the women at the end of their journey but has so little to work with you can you see her struggling with the material. At one point Jones and Streep have a conversation so awkward it feels like the audience is watching community theater. Everyone involved deserves better.

Its inability to find a tone will ultimately cost it the Oscar it so desperately wants to win. For all its problems though, The Homesman is a generally enjoyable movie for those that like gritty westerns. Jones has the potential to be the next great filmmaker but that will come when he stops imitating and really embraces his creative spirit.

The Homesman opens to a limited release on Nov. 14.