The epic phenomenon of “The Hunger Games” came to a close last night with the debut of the final installment of the global franchise “The Hunger Games: Mockingjay – Part 2,” which held its Los Angeles premiere at the Microsoft Theater in downtown Los Angeles.

The premiere was scaled back by Lionsgate in the wake of the terrorist attacks on Paris earlier this week, canceling all red carpet interviews among security concerns. Press Pass LA was honored to snag a coveted photography spot at the event! 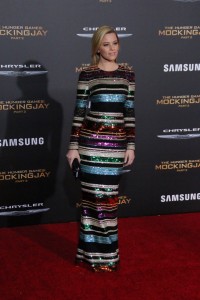 Cast members paid tribute to the victims of Friday’s Paris attacks by wearing their Mockingjay pins adorned with ribbons in the colors of the French flag.  Elizabeth Banks (Effie Trinket) shared a photo of herself wearing the pin on Twitter captioned, “Our hearts are with you, France, where we have so many amazing fans.” Scenes from Mockingjay Part 2 were filmed in France.

Thankfully, the premiere went off without incident and fans lined the streets to catch a glimpse of their favorite stars before heading into the premiere screening.

The final film finds Katniss Everdeen (Jennifer Lawrence) realizing the stakes are no longer just survival, they are for the future! With the nation of Panem in a full scale war, Katniss Everdeen confronts President Snow (Donald Sutherland) in the final showdown. With the help of her closest friends – Gale (Liam Hemsworth), Finnick (Sam Claflin), and Peeta (Josh Hutcherson) – Katniss goes off mission, using the unit from District 13 – and risking their lives to stage an assassination attempt on President Snow increasingly obsessed with destroying her. The moral choices and mission that await Katniss will challenge her more than any arena she faced in The Hunger Games!