THE INFILTRATOR IS ANOTHER WIN FOR BRYAN CRANSTON

“You follow drugs, you get drug addicts and drug dealers. But you start to follow the money, and you don’t know where the fuck it’s gonna take you,” said Lester Freamon. Back in the cocaine-infused 80s U.S. Customs Agent Robert Mazur decided to follow the Medellin cartel’s money, and it led way up and far out.
Bryan Cranston returns to the drug biz as Mazur in Brad Furman’s The Infiltrator. This time he goes undercover from ‘the swept side of the street’ to the dirty side, posing as a large sum money launderer for the mafia trying to get in with the cartel, all the while careful not to track mud back to his wife and two children. This happens with minimal success, of course, we wouldn’t have a very fun movie if it all was about the accounting aspects. 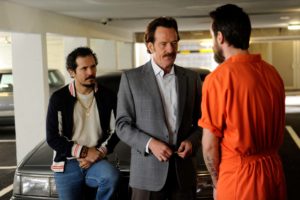 And yes, The Infiltrator is a very fun movie, once it gets going. After an opening scene where Cranston literally sizzles we get bogged down with a bit of clunky exposition. Cranston is his usual brilliant self throughout, even with derivative tropes reminiscent of Donnie Brasco and The Departed (i.e., getting too close to targets, fake persona bleeding into real life persona). We even have some classic rock tracks from Marty Scorsese’s school of montage, but with the right tunes and ambiance, it works.

But where Blow focused on the drugs, big numbers, apartments teeming with cash, and the sheer opulence of that life, Infiltrator puts a few twists on it. This film is about the money, and the people connected to that side of the drug trade. You’ll see more cocaine at a Hollywood party than you will in this film, which serves it well. People drive the drug trade, and this movie is about those people at the top echelon, the powers that be. This makes way for some crazy yet memorable characters played by a great cast.

Once Mazur establishes his new persona and starts to climb the long, dangerous ladder up the ranks of the cartel, this film finds its edge. The suspense is taut, well-written, with a fantastic cast throwing down some killer dialogue. Also the atmosphere, the feel of the movie is legit (despite the film being mostly about subterfuge), during quieter moments you can hear PSA’s from the 80s and the calming voices of Ron and Nancy telling us to ‘Just say no.’ This makes the film not just a story about money laundering with a few name drops but a timepiece, when people thought the war on drugs was a necessary and winnable thing, never knowing our own government’s role and sometimes culpability with it, which is something this film has a bit to say about.

Even though much of this story and its protagonist seem and are familiar, director Furman and screenwriter Ellen Brown Furman (from Mazur’s book) managed a finely cut suspense-thriller that stands on its own. With the help of Bryan Cranston and a SAG award worthy ensemble we have a very good film with an important story about the drug war at a time when the drug war has been all but forgotten. This film is not about cocaine, however, it’s about finding the sinister people insulated by power and money who use it for more money and power.