THE INSIDE SCOOP ON THE BIG SHORT

When director Adam McKay set out to make a film about the collapse of the global economy he brought some of the biggest names in Hollywood with him. The result is The Big Short, one of the best films of the year.

“I was very interested in the financial crisis. I’d done some research for a movie I’d done called The Other Guys, which was supposed to be a comedic parable of the collapse. So I started reading all the books I could get my hands on and at a certain point when you’re doing that you come across The Big Short,” McKay told Press Pass LA at a recent press conference. “It had this page turning energy to it, yet at the same time it was explaining financial esoterica to me and then at the same time the characters were heartbreaking and real and specific. It was just amazing to say it about a book that’s about mortgage-backed securities, but it was a roller coaster ride.”

The film allows some of Hollywood’s best actors to play outside of their comfort zones and, for some, totally against the type of characters they usually play.” I was frankly surprised to be offered this part, and was very excited. Although I felt like one of these things is not like the other, when you say Brad Pitt and Ryan Gosling and Christian Bale,” explained Steve Carell.

As Mark Baum, Carell brings weight and anger to his role giving his character, a Wall Street crusader with a mean streak. Yet in casting the usually lovable Carell the film finds its heart and moral center. “It was intimidating because these are great – like this entire cast, it’s just full of great actors. I think every part really stands on its own. I think it’s a really wonderful, complex, nuanced performances, all across the board. So that was exciting for me to just be a part of that ensemble.” 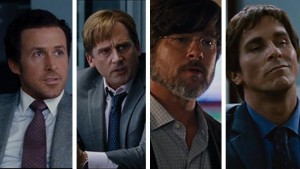 This truly is an ensemble film. Though each actor is a cinematic heavyweight in their own right they each have their moment to shine in a movie that not only entertains but has a message. “I learned a lot from the script and then obviously through Michael’s book and then through the research process and even through watching the film, I’ve learned more,” notes Ryan Gosling, whose character Jared Vennett is a powerhouse of personality in the movie.

“I thought it had a really – and I think Adam has, especially in combination with Michael, their work, it’s very unique, this film. You know, it’s very inclusive and there’s nothing, you know, there’s no like grandstanding and I think in the hands of a lot of other filmmakers it could have been very, very different, you know. But Adam just has a way of maintaining his sense of humor about something that’s obviously very upsetting, and I think it’s very unique and it just was very exciting thing to be a part of,” says Gosling.

One of the best performances of the movie, unsurprisingly, goes to Christian Bale as Dr. Michael Burry. A San Jose-based neurologist-turned-money manager full of eccentricities Burry somehow manages to stumble on the economic bubble before anyone else. “Mike studied thousands and thousands of individual mortgages in order to create a pattern, “Bale explains of his character. “ No one else had the energy to do that. Everyone else was having a good time, making lots of money. Nobody wanted to shout, ‘Stop the bus, I want to get off’, but Michael did. He discovered it was total crap.”

With a slew of award nominations already under its belt including the Golden Globes, The Big Short is sure to electrify the masses.