The red carpet lead the way to a magnificent night filled with friends and a eloquent artsy décor. The music was loud, as David Bowie was on the playlist, per Nelson’s request, we can only wonder if he might be working on a piece of him. Moet Champagne and Toast Vodka was on the menu and delicious tuna tartar was being served. Press Pass LA was there to capture the moments of glamour and display of creative paintings.

The art that can be seen in Galleries in New York, Florida and at celebrity’s homes was available to the public at Bagatelle for their viewing pleasure.. Most of his work is modern pop art, which illustrates ideas, and what is trending. Nelson’s target is the public who can relate to the extravagant life, the high maintenance and those that lavish in the art of happy hour. His work contains images of Mickey Mouse 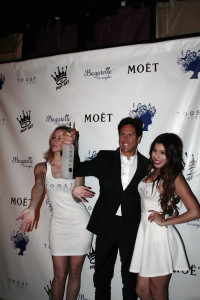 doing graffiti art on a wall tagging the words “Famous”.

There is the most famous theme of his, The High Maintenance, where phrases are part of the piece. Phrases like “Oh Pool boy…” are symbolic as the girl is taking a quick dip in the pool and she looks back at what we can imagine it be the pool boy. The art, which defines creativity and ideas, is contemporary and very well liked by the Millennials. Nelson, is a great story teller not only can he captivate the interests of followers with his art, but his words are soothing, we sat with him as he talked about his art this is what he had to say.

“ As a kid I always knew I wanted to be an artist I just was not sure how to start. I actually started in my late 20’s and I wish I would have starter earlier. I do not paint for money; I paint because I love it the money comes on its own. I am just very lucky to have met the people I did. I met Michael Jackson on June of 2009 and I was going to work on a piece where I could include him in the some work. I went to his house, it was surreal, there was Christmas music which was so bizarre, I had dropped some CD’s that he was going to sign for me the entire experience was really weird. Then I sort of became The King Of Pop Art, as TMZ named me.”

The King Of Pop Art was crowned at his dining table where he enjoyed the rest of the night with family and friends. His high school art teacher drove two hours to experience Nelson’s lavish life style and phenomenal art display. All in all a night filled with art for this gentleman’s birthday and great choice of music goes down on the books.