I recently attended the Dances with Films Festival in Hollywood, in part because I’ve long wanted to check out this great festival and in part because my good friend was starring in a feature she also wrote and produced called The Last Treasure Hunt. I didn’t know what to expect from either, but my expectations were surpassed by both.

The Dances with Films Festival now in its 18th year, showcases the best emerging artists and unknown filmmakers pushing the boundaries of filmmaking with innovation and unique talent. This year’s festival  featured 128 screenings across all programming slates including features, shorts, documentaries, and music videos. You can check back to find out who won here!

My friend Kate Murdoch certainly fits the description for an up and coming talent breaking boundaries. She is a quite possibly one of the most talented and ambitious people I know. All bias aside, you need only watch her feature The Last Treasure Hunt as proof.

This film tells the touching story of siblings Oliver and Lucy Sinclair,  who were raised by their father on family treasure hunts.  Their father held a hunt each year, sending his children gallivanting around the house and small island on which they lived to find hidden prizes and secrets. But over time Oliver and Lucy grew up and grew apart.

After a year of estrangement, their eccentric father unexpectedly passes away, and the two siblings journey back home to put his affairs in order. Oliver leaves behind a very pregnant girlfriend, Susan, and a less than successful small business running a book shop. Lucy skips out on her university studies, which she is more than happy to do.  After a tense reunion, the pair meet with their father’s lawyer and instead of being handed a standard will, the two are met with something unexpected… one last treasure hunt! Oliver and Lucy discover that they must work together to solve the hunt in order to receive their father’s inheritance.

The film takes the viewer on a powerful journey as we explore family dynamics tackling themes of betrayal, disappointment, death and fear of the unknown amidst the whimsical setting of a gorgeous old house, a beautiful island, and one last adventure! We sat down with Kate Murdoch to find out what inspired this moving and unviresal tale.

PPLA: How did you come up with this script idea and come to work together with your co-star and co-writer Casey Nelson?

KM: Casey and I met in an acting class and realized that we had both been camp counselors at the same TINY little running camp in upstate VT so we immediately bonded over that. Because, I mean, how crazy is that?! We started going on runs together and Casey pitched me the idea for a script (now called The Perpetual State of Georgia) and that was the beginning of us being writing partners.

While we were writing Perpetual, we thought it’d be great to write a script that we could actually make ourselves, and so we started formulating the foundation for what would be The Last Treasure Hunt. My family has this great house on Fishers Island, NY, where we filmed, and my aunt used to send me and all my cousins on treasure hunts around the house. So I brought all that to Casey and we started tinkering from there.

PPLA: What was the biggest challenge in getting this film made?

KM: Fundraising definitely was, and still is, the biggest challenge in getting our film off the ground. It’s just always a topic of conversation on low budget indies like ours. BUT that being said, we got really fortunate in having some fantastic people believe in us and support the film. I also think that being limited in the amount you can spend forces you to be really creative sometimes and that can be really important for growing as a filmmaker.

PPLA: Tell us about that location and shooting on location. The house and island were their own character in this film.

KM: The house was located on Fishers Island, NY. It’s been in my family for years and is such a huge part of my childhood and who I am as a person. It was so cool and special to show that place to everyone! The island is really awesome too, it’s this tiny little place where only about 200 people live year round. We were a little worried about disturbing the residents and were hoping they wouldn’t be too wary of outsiders, but they were really welcoming and seemed to be excited for us.

The location was challenging too, since we had to logistically deal with the limited ferry schedule, not a lot of housing options and not a lot of places to replenish supplies. The grocery store was only open a few hours a day since it was the off season, so if we ran out of milk after 4 we were out of luck! But all that kind of made it into a cool summer camp situation, and I think we all were down to rough it. We’d play music and have some beers and unwind every day after shooting. It was just a really good time.

PPLA: Were there any unexpected challenges or surprises during the process?

KM: Uh, yes. Haha. Yes, yes yes. So many. The biggest challenge was contending with schedule. But I think you know that going in. In particular we were able to get access to the bar on the island, but we only had a few hours to shoot there so we had to cut loads of stuff. It was a pretty long scene, and we knew that there was no way we’d be able to get it all in with the time we were given. That was pretty stressful! In the end, we still didn’t get all that we needed so we had to do some further chopping in editing. That was pretty hard to swallow. But in the end, we were able to make it work.

PPLA: What do you hope fans take away from this film?

KM: I just hope people like it! I know that sounds uncool. But my greatest wish is that people really enjoy themselves while they watch and have a good time. Our Q&A moderator at Dances with Films said she immediately called her sister after watching and told her that she loved her. That was so incredible to hear.

PPLA: What’s up next for the film and the two of you?

KM: We’re hoping to make a strong festival run. Part of why we wanted to make our own project was so we could get more involved in the film community and so I’m excited to go to other festivals and meet other young, hungry filmmakers. 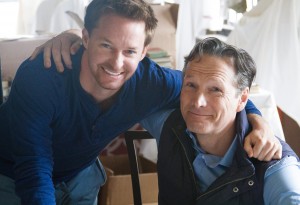 The first script we wrote, The Perpetual State of Georgia, was optioned by a production company in Georgia and we hope it’s going to be going into production by the end of the year. Casey’s next project is co-directing a film called Southern. I’m sure he’ll be sharing more details on that soon!