The Late Bloomer Should Have Blossomed Later

Birds, bees, first base, second base… code words for S.E.X. Sex, it’s inherent in all of us and according to great philosophers it’s a basic need for survival.  Well imagine if this basic need to survive didn’t blossom when it should’ve and stayed dormant well into your adult life.
The Late Bloomer tells the true story of a man who doesn’t hit puberty until his late twenties. This sounds like a horror movie for sure, or at least a horror in real life, but The Late Bloomer is a comedy based on the memoir written by E! News’ Ken Baker.

The title pretty much gives away the plot-line of the movie and while it had some humorous moments, it was rather anti-climactic (pun intended). I felt the biggest shock or “OMG” moment was when you find out why the main character, Pete, never had any sexual desires growing up and remained abstinent a solid portion of his adult life. The acting was mediocre despite the knockout cast: J.K. Simmons, Brittany Snow and Jane Lynch to name a few. It wasn’t that the acting was bad; it just felt like the movie was lacking energy and chemistry between its actors. 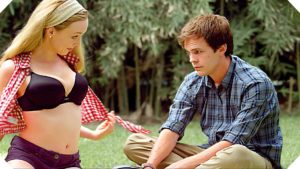 Johnny Simmons who plays the main character Peter Newmans, a man in his late 20’s who has yet to hit puberty, did a fantastic job acting out all of the intimate and awkward“pleasure” scenes. Pete lashing out on his friends, family and his love interest were so reminiscent of a pubescent teenager. One minute he’s happy and the next he’s ready to rip someone’s throat out. Johnny Simmons did a great job capturing the intense mood swings teenagers go through and the pure confusion that comes from said mood swings.

I wish we were given more romantic scenes between Pete and Michelle (Brittany Snow’s character). Their romance never really blossomed. It was a simple friendship infatuation at first, then jealousy and then they were making up in a restaurant. We only get a whiff of the sexual tension and desire between them before Michelle leaves the state and the movie is ending. I feel if there were more on-on-one scenes of Pete and Michelle, then their relationship and admiration for one another would’ve come across better onscreen. If you’re going to make a movie about a sex deprived man who hits puberty in his 20’s, then the main character’s love interest better be in more intimate scenes. You can’t just have them kiss passionately and the next scene she is pregnant, we all know that’s not how that happens!

I enjoyed the heartfelt moments between Pete and his father, James, played by J.K. Simmons. You could feel the sadness in Simmons’ character before Pete hit puberty and the sheer excitement and happiness once Pete hit puberty.  There was also a lot of unnecessary time spent in his office with patients. I understand he is a sex addiction therapist, but that is not what the movie is about. This is where the movie fell flat and lost my interest. The movie is about a man who had a brain tumor blocking his pituitary gland for his entire life, which led to him never experiencing puberty.

It’s a crazy and fascinating story, there’s no doubt about that. It’s a comedy; however, I wasn’t laughing as much as I thought I would. I’d check it out if you’d like to see what happens to a man who hits puberty in his twenties.