THE LIVE ACTION JUNGLE BOOK IS ANOTHER HOME RUN FOR DISNEY

I approach every new live action Disney movie with caution. Their attempts to turn what seems like their entire animated catalog into a real life experience can be hit and miss. Thankfully, The Jungle Book not only survives the transition but holds up nicely.

It does help that the studio put the highly underrated actor and director Jon Favreau in charge. Though his works aren’t always masterpieces they do tend to push the envelope and he’s always willing to experiment. That shows quite a bit in the new Jungle Book which actually takes more from Rudyard Kipling’s original book than the 1960s Disney movie. 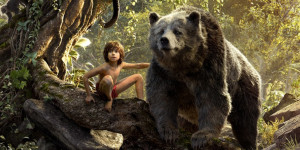 Mowgli and Baloo are ready for new adventures.

All the familiar elements are there. Mowgli (Neel Sethi) is an orphaned who was raised in the jungle by animals but now must head back to the man village because the fearsome tiger Shere Khan (Idris Elba) is after him. He is helped along the way by his mentor Bagheera (Ben Kingsley) and best buddy Baloo (Bill Murray).

What unfolds is not just a great adaptation of the classic book but easily one of the best kids films in years. Let me clarify that, one of the best kids films that genuinely seems like it’s made for kids. Pixar and Dreamworks make amazing movies but most of the time they feel like a lot of the content is meant for adults and can go over the heads of their children. Not so in The Jungle Book. The movie is fun and full of lessons that never feel dumbed down. Favreau clearly respect his audience and the material.

But this is a Disney movie as well and it wouldn’t be the same without more than a few callbacks to the original. Favreau even finds a way to slip in some singing in a way that, while it doesn’t always work, lends itself to the fun. The only real awkward part comes with King Louie, voiced by Christopher Walken. Something about Walken’s voice coming out of a giant orangutan just doesn’t feel quite right. Plus they made his proportions so huge he could practically take on King Kong, it is a little jarring.

That being said, this is a movie that is a testament to how far technology has come over the years, though the entire thing was filmed in downtown Los Angeles it truly does look and feel like the deep jungle. The 3D looks amazing too and this movie takes full advantage of it. Every shot has depth and hidden details that come alive with the extra dimension.

Once again Disney proves why it is a leader in family cinema. Even when it copies its own work it manages to do so in an original fashion.