THE LOBSTER IS THE MOST DISAPPOINTING MOVIE OF THE YEAR

The Lobster might be the single most disappointing movie of the last decade. It’s not incredibly bad or painful to watch just a total waste of a truly fantastic premise.

In the not too distant future those who remain single after a certain age have 45 days to find a mate in The Hotel or they are forced to be turned into the animal of their choosing. On paper it is a mind-blowing idea full of possibilities and there are occasional hints of genius, but for the most part director Yorgos Lanthimos plays it so straight it’s almost boring. 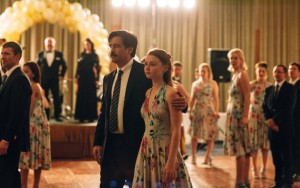 Colin Farrell tries to find love at all costs in The Lobster.

That is a serious shame because the film is stacked with some serious acting talent. For most of the film we follow David (Colin Farrell) a recently divorced man sent to the hotel to find a mate or come to terms with animal reassignment. Along the way he becomes friends with two men in similar situation, both desperate to find a mate before their deadline is up.  What follows is a strange dystopia that perfectly summarizes the way many single people feel in modern society.

The only problem is Lanthimos is so desperate to make it an indie film that he goes out of his way to make the film different and it seriously hinders the movie. For some unknown reason everyone in the film speaks in monotone and seems to be downplaying their acting abilities. For a while that might work to show the nervousness in the characters but it happens in every single scene. It actually becomes a little grating.

If this were a straight indie from a first time filmmaker that might be overlooked but not when people like Ben Whishaw, John C. Reilly, Rachel Weisz and Léa Seydoux are involved. They are so underutilized in the film it is almost a crime holding them back like that.  The result Is a whole film where the entire cast sounds bored and if they aren’t interested there’s no reason for the audience to get invested.

The foundation for a truly groundbreaking film is there but Lanthinos ruined it. In the hands of another director the exact same script could have popped and really struck a chord with an entire generation of single people. There honestly has never been a film like this before and there’s every reason for it to be great, except it isn’t.

These indie filmmaking traits are becoming more and more common to the point where you can see them coming from a mile away. There was a time when working outside of the studio system meant more freedom for filmmakers so they tended to push the limits. And while there are still many that do there’s a large portion of modern filmmakers that are so against using any kind of CGI or pushing their talent that the result ends up being mediocore and a waste of a potentially game changing idea.

Unless you plan on being bored for an hour-and-a-half skip The Lobster in theaters. This is one curiosity better suited for Netflix.