ONE-ON-ONE WITH THE LOTTERY’S CHRISTIANA LEUCAS

This summer, Lifetime took a chance with a groundbreaking original series The Lottery. Set in a world where women have lost the ability to stop having children, everything changes when 100 embryos become successfully fertilizes and a national lottery is held to decide who the surrogates will be. The result was a fascinating, sometimes intense, emotional roller coaster that took viewers deep into that world.

One of the standouts of the series is Christiana Leucas, who played the ill-fated Angela Perez. Press Pass LA had the chance to sit down with Leucas to discover what it was like playing such a unique character. 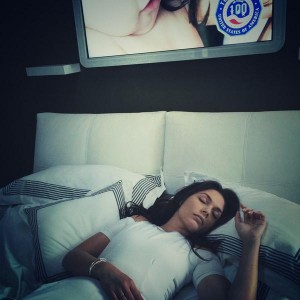 PPLA: What attracted you to the role?

CL: Back in the day I would have been squeamish about playing such a role, but at the time I got the phone call I was in a very spiritual place and the character just felt right. It was the kind of character that could have come off as hokey, but I didn’t see it that way and I became really invested in Angela and her place in The 100.

PPLA: Do you identify with your character at all? What did you need to draw upon to play her?

CL: I identify with her being a woman who grew up a certain way. I also like the fact that she really had a lot of love to give the world and could make the world a better place. I feel like I went on a spiritual journey and looking back I am a totally different person.

PPLA: You’ve done both TV and film now, which do you prefer?

CL: My heart will always be in film but I don’t necessarily have a preference between the two.

PPLA: The Lottery is sometimes a very serious and heartbreaking show. What was it like on set?

CL: On set was amazing. You had a cast and crew that was ready to rock at a moment’s notice. Everyone was phenomenal. All the little details were very in communication with what it meant to be an actor and it was clear everyone wanted it to be the best show possible.