THE MOWGLIS KICK OFF THE GROVE SUMMER CONCERT SERIES

“We drove in 10 hours for this!”  “She’s from Germany!”  “We’ve been here since 6 A.M.!”  Just a few of the things heard while waiting for The Mowglis to take the stage to kick off The Grove’s Summer Concert Series.

Surrounded by a crowd that seemed more appropriate for a 1999 N Sync concert, their anticipation was palpable.

The indie-rock septet The Mowglis hit the stage at 8PM and the 14-hour wait was over.  Starting strong with Say It its immediately clear why those teeny boppers made the trek.  The energy from the band from start to finish soars as they blast out their message of positivity and love.  Each song having more energy than the last, they climaxed with their biggest hit San Francisco.

After that, the show waned, but popped right back up with a medley of songs including a cover of What’s Going On.  Culminating with their latest single I’m Good, the band left to a crazy ovation and a crowd reluctant to leave. 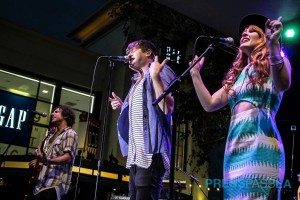 With three more shows to go in this series, you should get to The Grove on Wednesday nights!