THE NIGHT BEFORE HAS THE GOODS BUT NEVER DELIVERS

The Night Before, the latest film from director Jonathan Levine and his longtime creative partner Seth Rogen, should have been great. With a cast full of seasoned actors and comedians plus an all-start writing/directing team it had so much going for it, yet it never delivers.

The concept is easy enough, three best friends Ethan (Joseph Gordon-Levitt), Isaac (Seth Rogen) and Chris (Anthony Mackie) have spent the last 15 years together drinking and partying it up on Christmas Eve. This year is a little different, now that Isaac is about to have a baby and Chris is a world famous NFL star it is time to put the tradition to rest, but not before one last blowout. 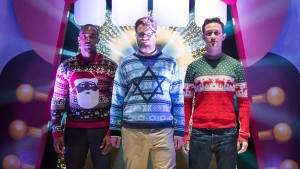 Anthony Mackie, Seth Rogen and Joseph Gordon-Levitt star in The Night Before.

Taking place over the course of a single night it follows basically the same formula as Harold & Kumar Go to White Castle. Hell, it’s basically a retelling of A Very Harold & Kumar Christmas only not nearly as funny or edgy. Full of nostalgic references and celebrity cameos it has the right idea but loses itself in the execution. Where Harold & Kumar was fresh and more than a little subversive The Night Before just comes out as recycled and kind of cynical.

This may be due to the fact that there are no real characters in the film, at least no one worth noting. With three phenomenal actors at its disposal it wastes all of them. Joseph Gordon-Levitt, the everyman of our generation, comes off as kind of a desperate jerk who only gets to the big party because he stole the tickets. That’s not someone we want to root for in a movie.

Seth Rogen has all of about 10 minutes to get in character development before he downs a ton of drugs and then essentially fades into the background for the rest of the movie. The only one with any real character arc is Mackie’s Chris but he’s not given nearly enough screen time. Really the best character is Mr. Green, the group’s drug dealer that may or may not be a heavenly deity. They could have made the whole movie about him and it would have been watchable.

To be fair, the movie does have moments of inspiration that truly funny. It plays with some interesting concepts and, though it may never be a classic, is great to watch with a group of friends. This is the kind of movie that will play in the background at college holiday parties for years to come.