THE OFFSPRING PERFORMS SOLD OUT SHOW AT HOLLYWOOD PALLADIUM

Last night was an epic night for all Offspring fans who attended their show at the legendary Hollywood Palladium.The band performed a little over an hour to a sold out crowd and just as expected blew everybody’s headbanging minds.

Whether it was your first or 100th Offspring show, the opening to their show was perfect. The band opened with the ultimate stress relieving song, “Bad Habit”,You may wonder why I call it stress relieving- because you get to chant bad words so loud you can’t even hear your own voice. Everyone in the crowd sang along word by word. Like I said earlier, epic. 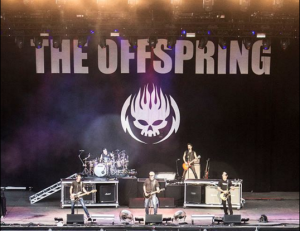 The band continued a solid set, so good it felt as if the entire show was only twenty minutes. In between songs they talked about how great it was being in Hollywood and the differences between Orange County and Hollywood. Some of the differences they talked about were that in the OC everyone looks the same and all the streets are too clean and perfect. In order to escape that they came to Hollywood, and all the freaky, and different people made them fall in love with the city. This obviously pumped us all up.

The Offspring continues there sold out tour Germany, Finland, Sweden and more throughout the year. For more show dates you can visit The Official Offspring Website .